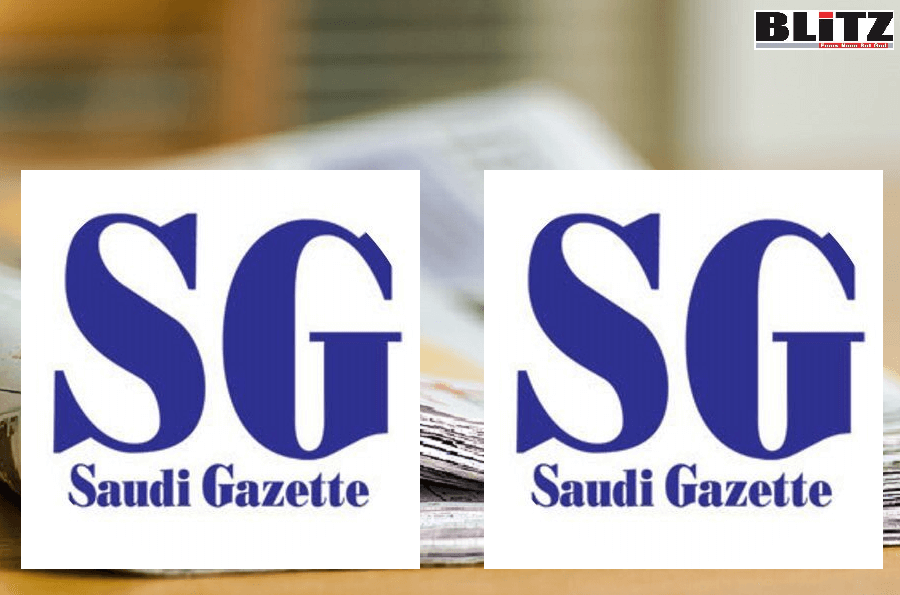 Minister of Commerce and Acting Minister of Media Majed Al-Qasabi launched on Tuesday the new identity of Saudi Gazette newspaper, representing a major turning point in its evolution that features staying abreast with the emerging technologies and disseminating the latest news and views. Writes Hassan Cheruppa

Saudi Minister Majed Al-Qasabi and Sheikh Abdullah Saleh Kamel, chairman of the Board of Directors of Okaz Organization for Press and Publication, joined virtually the launching ceremony held at the conference hall of Okaz Organization’s headquarters.

The ceremony marked the cutting of a cake by Jameel Altheyabi, editor in chief of Okaz and supervisor general of Saudi Gazette, on the occasion of the newspaper celebrating its 45th anniversary this year. Saudi Gazette newspaper came into being on April 17, 1976.

In his keynote address, Al-Qasabi congratulated Saudi Gazette team, headed by Altheyabi, for launching the new ID, as well as its new website and mobile application. “It is most gratifying to see Saudi Gazette has embarked on the most indispensable and advanced track to keep pace with the developments and changes in the media scene,” he said while wishing the newspaper every success in continuing its vital role in the Saudi media realm.

Highlighting the Saudi government’s goal to create a strong and influential local media, Al-Qasabi emphasized the need to develop the content in a way reflecting the unprecedented and radical changes that the Kingdom is witnessing at present to realize the goals of the Kingdom’s Vision 2030.

“All Saudi media organizations have to take and follow the continuous path of development and expedite the pace of working toward their digital transformation to keep pace with the changes that are taking place in the media field all over world,” he added.

In his speech, Sheikh Abdullah Kamel thanked Al-Qasabi for his unwavering support to the Saudi media in general and Okaz and Saudi Gazette newspapers in particular.

Highlighting the great support the Saudi media enjoying under Al-Qasabi, he lauded him as ‘a man of deeds rather than words,’ saying “we are optimistic about a bright future for Saudi media under his leadership.”

Sheikh Kamel offered full support to Saudi Gazette, while noting that the portal is playing an influential and active media role in the fast changing world of digital transformation.

In his opening remarks, Altheyabi thanked Minister Al-Qasabi, Sheikh Abdullah Al-Kamel and other dignitaries for their presence on the historic occasion of Saudi Gazette appearing in a new digital garb.

He highlighted the growing role of the news portal in discharging its mission in the fast dissemination of news in a reliable and highly professional way.

“We are determined to go ahead with the transformation while embracing a qualitative leap in the media field aimed to achieve better future by highlighting the remarkable achievements made by the nation and its wise leadership and consolidating the security and stability of the nation, in a way achieving the goals of the Vision 2030 under the leadership of Custodian of the Two Holy Mosques King Salman and Crown Prince Muhammad Bin Salman.”

In his speech, Anas Alyusuf shed light on the pivotal role being played by Saudi Gazette as one of the most influential Saudi newspapers.

“As the most reliable and dependable source of information, Saudi Gazette covers all major local and international events with a focus on the transformation that is taking place in the Kingdom under the leadership of the Crown Prince. We focus on the content covering all the cultural, economic, societal aspects of the Saudi life, with giving top priority to human being,” he said.

Briefing on the new identity, Ekleel Sallam said that the new ID is in line with the Kingdom’s Vision 2030, which eyes development while also sustaining tradition. “The new logo is a merger of Arabic and Latin languages as one can see letter S is merged with “seen” in Arabic and letter G is merged with “Jeem” in Arabic, and this brings about a synergy of tradition and culture — truly telling the story of 45 years of Saudi Gazette evolution — still leading the way in the digital revolution,” she said.