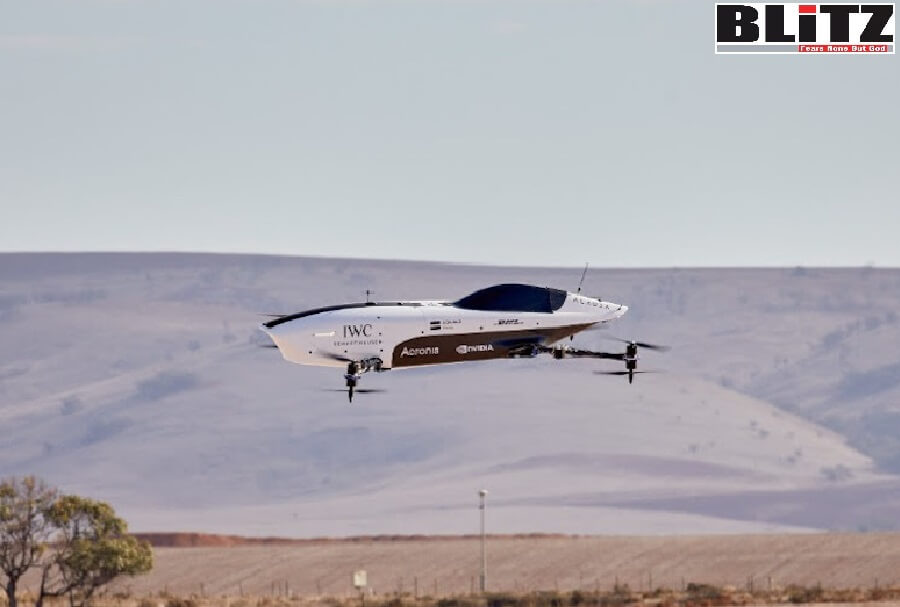 Created with the support of South Australia’s concentration of space tech and aerospace engineering, the uncrewed ‘multicopters’, Airspeeder says, have a larger thrust-to-weight ratio than an F-15 fighter jet – requiring quick reflexes that explain why pilots have been sourced from aviation, motorsport and gaming fields.

Consultants with Telstra Purple – the company’s special-projects consulting arm – will be deeply involved in the project over the next 12 months, helping Airspeeder develop the link between the pilots’ cockpits and the flying vehicles using private 5G networks set up at three remote racing sites around the world.

Because 5G networks offer high speed and extremely low latency, the fast-moving vehicles will be able to respond almost instantly to control signals sent by the pilots.

Each pilot in the race is given an identical vehicle, reducing confounding factors and ensuring that the competition is about pilot skill only.

Like the collision avoidance systems fast becoming standard within modern automobiles, the flying cars use LiDAR and radar powered ‘virtual forcefields’ that detect other nearby vehicles and automatically divert the vehicles, ensuring they don’t collide in mid-air.

The flying vehicles are riddled with sensors, generating terabytes of data that will be relayed back from the vehicles and stored in an AWS cloud environment for close analysis by engineers.

“For a technical sport like this, it’s going to be fundamentally data driven from the ground up,” said Telstra Purple digital transformation executive Paul Nicholls, noting that the architecture would also support “fully immersive 5G powered spectator experiences” such as augmented reality and virtual reality representations of the action.

The technologies “will enable a new way of experiencing what is essentially a next generation of sporting events,” he said, noting that “more traditional content-driven sports” are being augmented with real-time telemetry data to create a new mixed-reality environment – as was seen at this year’s 2020 Olympic Games in Tokyo.

Testbed for the real thing

Alauda Aeronautics is one of numerous contenders to commercialize the flying cars, having completed the first test flights of its Mk3 electric flying racing car near Adelaide in June.

And for all the fun of the competition, the project also serves a bigger purpose as a testbed for eventual manned electric vertical take-off and landing (eVTOL) aircraft, as flying cars are formally known.

The Mk3 vehicles contain robot ‘aviators’ that mimic the movements of their human pilots, providing performance data that will help engineers understand how the vehicles would respond if they had an actual human sitting in them.

This information, in turn, will help refine safety mechanisms for eventual manned electric cars – a longer-term goal that Airspeeder CEO Matthew Pearson said has remained a motivator for everyone involved.

“Apart from the fact that you’re going a little bit too fast,” he explained, “a race environment is quite a benign environment for proving technologies – pushing technology to its limit in a controlled way.”

Ongoing R&D was helping the fast-evolving industry tackle “significant hurdles,” he said, noting still-evolving battery technologies and regulators’ efforts to keep up with the fast-changing technologies.

Battery technology “is not quite there to make things easy for the industry,” Pearson explained, “but we believe it’s coming. And there are regulatory hurdles because the vehicles are being invented while the regulators are trying to figure out how you regulate new aircraft.”

Amid concerns about potential cyber attacks, the industry has moved rapidly towards flying cars this year, with Hyundai and Uber building a flying taxi fleet and Uber choosing Melbourne as its only non-US site for testing flying taxis.

“We believe all of the challenges are solvable,” Pearson said, “but in the meantime, the technology is there and it’s proven enough. We want to hasten that and ensure there is acceptance around the future as well.”

Communications providers like Telstra will be critical to supporting the broader flying-car ecosystem, Pearson said, with extensive R&D and billions of dollars being poured into work around ensuring every flying vehicle can be guided between ‘skyports’ and ‘vertiports’.

“Leveraging Telstra’s 5G network and technologies into that ecosystem really becomes important to work out how we can take big steps forward by pressing the edges of what’s possible,” said Nicholls.

This technology “really has the way to transform the way we move around cities, and accelerating mobility technology for mass benefit. Whatever we’ve done today is going to continue in different forms as we move forward.”