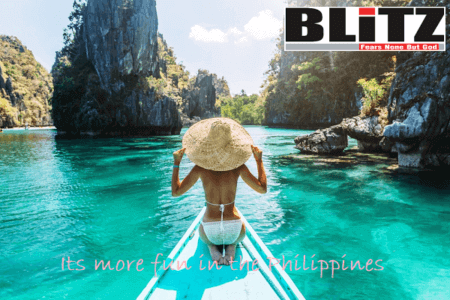 While in an article titled ‘Why tourists are not that much attracted to the Philippines’ published in this newspaper, we stated the number of tourists visiting the Philippines each year was below one million, a reader has stated that tourists arrivals in the Philippines has been increasing since 2017, with 6.6 million tourists in that year while the number was 7.1 million in 2018 and the authorities are expecting to cross 8 million in this year. The reader also claims that lots of foreign bloggers who made the Philippines their second home had introduced the country’s tourist attraction sites to the world through their writings and YouTube contents.

This newspaper always pays highest attention to the comments and suggestions of the readers and even we never hesitate in publishing criticisms about us our any member of the editorial board, which certainly is very rare in the world of publication.

The tourism industry in the Philippines

If anyone will ask – what is tourism like in the Philippines, most people would say – the country is known for having its rich biodiversity as its main tourist attraction. Its beaches, heritage towns and monuments, mountains, rainforests, islands, and diving spots are among the country’s most popular tourist destinations.

Well, it is true indeed but the most important point which should be mentioned here is the people of that country are extremely good – they show respect to the foreigners and above all, the country ensures safety and security to the foreigners visiting the Philippines.

International tourist arrivals to the Philippines rose by 7.7 number to 7.1 million visitors in 2018 compared to its level last year. South Korea remained the country’s top tourism market with 22.3 percent share to the total PH tourist arrivals in 2018, with 1,587,959 visitors. But of course, it yet not impressive if we shall compare it with the number of tourists visiting Thailand. Each year, over forty million tourists visit Thailand. What are the reasons that help Thailand in attracting a huge number of tourists and where are lacking from the Philippines side? We need to remember, while over forty million tourists visit Thailand every year, a significant proportion of them considering establishing business or economic relations with that country and some of them even establish their own companies and make investments. Meaning, Thailand’s tourism industry is not only generating billions of dollars each year from this sector but it also is helping the country in receiving a significant amount of foreign investments.

Tourists also are helping in boosting the export of Thai products and services to the international market.

It’s more fun in the Philippines

In 2017, the tourism authorities in the Philippines initiated the campaign titled ‘Its More Fun In The Philippines’, which saw tremendous success. But the campaign needed consistency and the authorities should have not only continued it but should have publicized Philippines’ tourist attraction sites through global media networks such as CNN, STAR, Discovery, Al Jazeera etc, which would help them in getting a substantial number of tourists from America, Asia, and the Middle East. Particularly the Philippines authorities need to target tourists from the Middle Eastern nations.

The site titled ‘Its More Fun In The Philippines’ enabled those who already have visited the country and made some exciting videos to share it on the site. But of course, the site only contains videos while it was essential for them to include some descriptive contents – not only in English but also in other languages with the target of attracting a far broader number of readers. Hopefully, the Department of Tourism in the Philippines will take some steps in this regard.

According to the Arab News,

The Philippine Department of Tourism has vowed to break the 2018 record for the number of foreign tourists visiting the country.

The Philippines welcomed 7,127,168 foreign visitors last year, and the department said it is aiming for 8.2 million this year.

Tourism Secretary Bernadette Puyat said the target is achievable because last year’s milestone occurred despite the closure of the country’s flagship destination and the department’s change of leadership.

“In creating a culture of sustainable tourism, we have had some challenges in instilling a paradigm shift in our popular spots where unsustainable practices have become the normal, day-to-day operations,” she told Arab News.

“But thankfully,” the rehabilitation of Boracay island “started a national movement to be more conscious of our environment,” she said.

This has inspired and empowered local communities to make their respective destinations cleaner and more sustainable, while the government focuses on preserving the biodiversity and capacity of tourist attractions, Puyat added. “This always equates to a better experience for our tourists,” she said.

Asked how the Department of Tourism plans to sustain growth, Puyat said: “We will go heavy in our marketing and promotions to sustain the growth of our key markets while increasing awareness about our country’s beautiful destinations in emerging markets.”

This year, the department is hosting two major aviation events, Routes Asia and CAPA Asia Aviation, to explore new routes and development opportunities for smoother and faster travel to and from the country.

This, Puyat said, is part of efforts to boost the Philippines’ bid to become an Asian aviation hub.

These upcoming events will showcase the newly developed Mactan-Cebu International Airport, and will bolster the country’s international networks and local tourism, she added. “It’s all systems go for these two major aviation events,” she said.

Through both events, the Philippine aviation industry looks forward to furthering capacity and infrastructure enhancements in the coming years, added Puyat.

Earlier this year, the Department of Environment and Natural Resources led government efforts to rehabilitate Manila Bay, similar to what was done in Boracay.

Manila Bay is known for its world-famous sunsets, but over the years it has become one of Asia’s most polluted bays. Environment Secretary Roy Cimatu described it as a “magnified cesspool.”

To restore the bay’s pristine condition, the government in January launched a massive cleanup operation.

Asked if the rehabilitation will help attract more visitors, Puyat said: “In fact it already is.” She added: “For the longest time, the bay’s beach area was filled with garbage. Now you can find quite a number of tourists.”

Is the Philippines the next icon of sustainable tourism?

As I have already stated, Philippines is a country of natural beauty—an archipelago of wondrous islands and idyllic beaches, majestic landforms and notable biodiversity. Add to these a rich history and an array of diverse cultures to make for a great tourist destination. Several of its scenic spots and cultural sites have, in fact, received recognition from international organizations, like the recent inclusion of the Underground River in Puerto Princesa, Palawan into the New 7 Wonders of Nature and certification as a UNESCO World Heritage Site. Unfortunately, these praises cannot erase the fact that the very nature we celebrate greatly agonizes from our own abuse as well.

Human neglect towards nature is evident: wild animals facing extinction because of poaching, woodlands disappearing because of deforestation, fields becoming barren because of climate change. While most environmentally-abusive practices have already been criminalized—illegal logging and mining, dynamite fishing, and irresponsible destruction of coral reefs—their practice still abound, enough to leave our lands and seas scarred.

But of course, authorities are not only promoting the tourism industry, but they also are putting the highest priorities to the environment and keeping the tourist destinations clean.

Filipinos are by nature hard-working and they know how to develop their own country. As the tourism industry in the country now seems to be heading towards a real boom, there should be immediate measures in establishing more restaurants, bars, pubs, nightclubs, amusement centers and of course motels, targeting those millions of tourists who would be visiting the country in the future.

Vijaya Laxmi Tripura is a Senior Correspondent of Blitz.