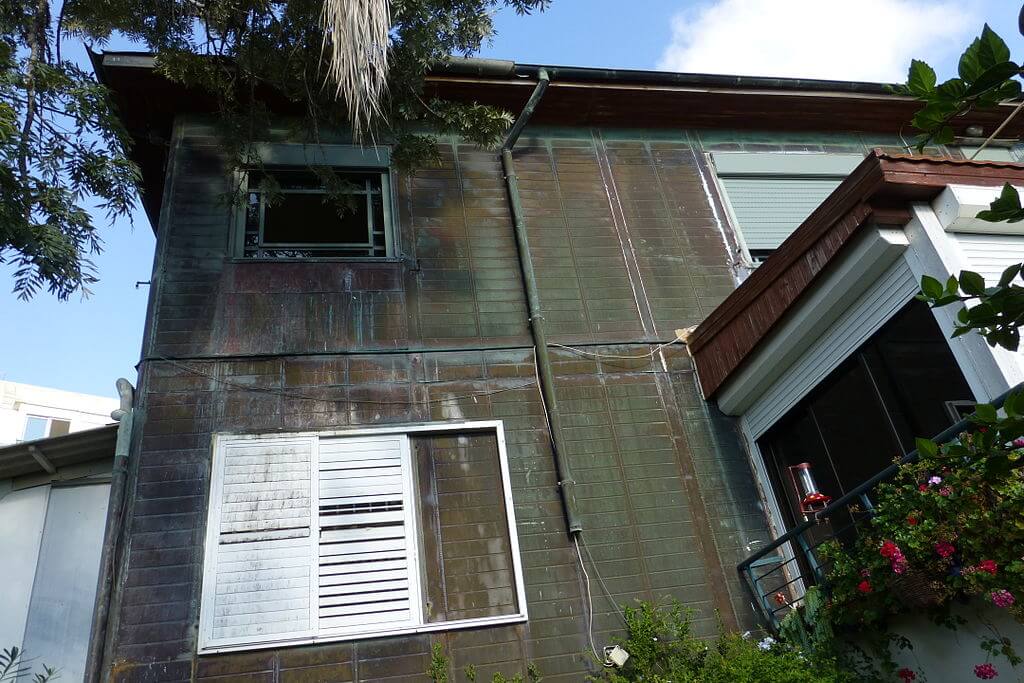 Ebeswalda was a German based, international copper and brass industry firm in the 1920’s, owned by Aron Hirsch and son. Using a patent for insulated metal walls that was developed by architects Fredrich Foster and Robert Kraft, the company became involved in mass and rapid produced housing. Consequently the company created a division for prefabricated copper houses in 1931.

The concept was to make the prefabricated components in the factory, transport them to the building site and assemble the house within 24 hours. It was hoped that the speed of assembly coupled with the relatively cheap price, (70 sq meters at a cost of 6550 German Marks) would address the needs of those countries that required mass and cheap housing that could be assembled quickly.

Walter Gropius (1883 – 1969) one of the preeminent architects of the period and initiator of the international style, was employed by the company to improve the design of the product. The concept drew interest in both the U.S.A. and the U.S.S.R.

The Zionist leadership of the Yishuv in the Land of Israel were also intrigued with the idea, as they anticipated the mass migration of Jews as a result of the Nazis’ coming to power and the need to build fast and cost effective housing. Upon their coming to power, the Nazis ordered all copper houses to be dismantled for the war effort. Some owners disguised their houses by painting them white, thereby saving them.

In 1932 the Hirsch company went bankrupt. Undetered, Aron Hirsch’s son in law set up an independent copper house division. With the advent of the 5thAliyah (1929-39), an ad appeared in the Zionist Federation Weekly (Judische Rundschau) aimed at those Jews who intended on making Aliyah. The 5th Aliyah numbered about 250,000 Jews, the majority of whom were professionals. 80% of this Aliyah settled in towns and the remaining 20% established moshavim & kibbuzim. In 1933 the company opened a branch in Haifa.

The Nazi rise to power in German led to increased concern for the well being of the Jewish community in the country. As restrictions imposed upon them grew, an agreement negotiated by one of the leaders of the Yishuv, Haim Arlosoroff, called the “Ha’avara”, was reached allowing 60,000 German Jews with some assets to make Aliyah.

The Ha’avara agreement allowed Jews to sell their assets in Germany and buy essential German manufactured goods that could be transferred to Eretz Israel. From a Jewish perspective it saved 60,000 Jewish lives and offered the Yishuv much needed immigrant labor and material assets. Many within the Jewish world opposed the agreement and two days after Haim Arlososroff’s return to the Yishuv, he was murdered on a beach in Tel Aviv. His murder case remains unresolved to this day.

During the mandate period (1917-1948), 14 of these prefabricated houses made their way to British mandatory “Palestine”. The idea did not hold and today only 4 of these houses remain. In addition, copper became important for the armaments industry andthe last copper house to arrive was immediately melted down to make ammunition.

The importance of the copper house lies not in their innovation. Their importance lies in their connection to the expulsion and annihilation of German Jewry and therefore an integral though lesser known part of Jewish history.

Copper houses are situated at the following addresses:

Note: These are private homes and can be viewed from the outside only, unless permission from the owner is obtained.

Ron Traub is a certified Israeli tour guide and can be reached by email at [email protected].

Published under special arrangement with Mida