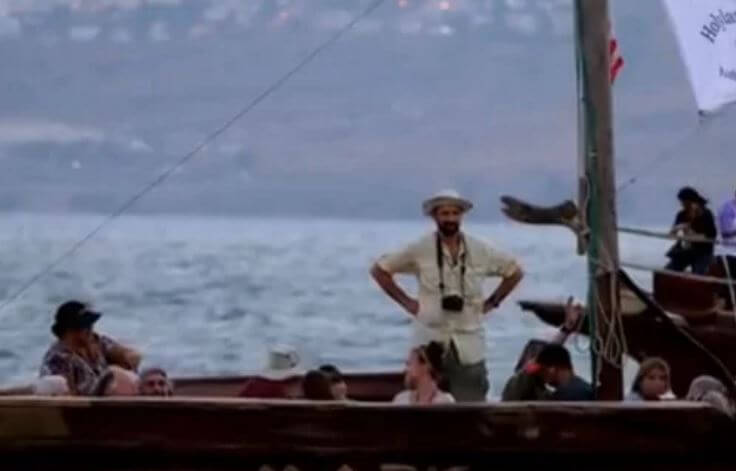 Have you ever read the story of the big storm on the Sea of Galilee that terrified the apostles to the point they were convinced they were going to die?

Until a few years ago, it seemed a little strange to me. Many of the apostles made their living fishing on the big lake. Surely, they had seen everything that body of water had to offer. But the story as told in Mark 4:35-41 suggests they experienced real, unprecedented terror that night.

The story began earlier in the day by the lake with Jesus teaching in parables. Then He suggested taking one of the little ships to the other side.

“And there arose a great storm of wind, and the waves beat into the ship, so that it was now full,” Mark writes. Full? I have to believe that means “full of water.”

Yet, Jesus wasn’t worried. In fact, He was asleep on a pillow when the apostles woke Him up saying, “Master, carest thou not that we perish?”

You know the rest of the story. Jesus got up, rebuked the wind and told the sea “Peace, be still.” That’s all it took. The wind ceased and “there was a great calm.”

Jesus asked His shipmates, “Why are ye so fearful? how is it that ye have no faith?”

They looked at each other and asked, “What manner of man is this, that even the wind and the sea obey him?”

With all the time I have spent over 40 years visiting Israel, leading tours, I have taken many boat rides on the Sea of Galilee. It’s always a highlight for the groups. I’ve seen the weather change dramatically crossing the lake – starting off sunny and calm and turning windy and rainy halfway across, then turning to rainbows on the other side.

But still, not until a trip we took a few years ago did I ever understand the absolute panic the apostles felt on Israel’s big lake.

I, too, thought I was going to die – along with everyone else on that boat.

We had a particularly big group, one that required three boats for all of us. The captain thought it would be a good idea to strap them all together. No sooner did we do that then the winds and waves started – and the boats began crashing into each other. That plan was quickly aborted.

By the time we were halfway across the lake, many had the worst cases of seasickness they ever experienced. But still there was more. At one point, all the chairs on deck smashed, sending men, women and children sprawling head over tea kettle. I looked around me at a hundred faces and saw fear – abject fear. I got the feeling we were in real trouble when I looked at the captain and his face was ashen. His crew seemed hapless.

We were all soaking wet from the rain and from the waves toppling on to the deck. Walking was as impossible as it would be on a rollercoaster ride that never ended.

These trips from one coast to another generally take an hour to 90 minutes. But, by the time we neared our destination at the port of Tiberias, it was too rough to dock. When conditions didn’t improve, the captain made the decision to go back to where we started. Suffice it to say there was a lot of praying going on.

I recall even reciting these words that night: “Master, carest thou not that we perish?”

Obviously, I couldn’t be telling this story if we capsized and sank. We all made it. And we all had stories to tell. In fact, every time I’ve taken one of these cruises with that captain, he tells the story of the most harrowing trip he ever took on the Galilee.

It was that trip that gave me some perspective to the story of Mark 4. I no longer thought the apostles were wimps. Their boats didn’t have motors like ours did. But, then again, we didn’t have Jesus sleeping on ours.

But I’ll tell you another way faith comes: From personal experience, I can testify that it comes by visiting Israel, the land and people of the Bible.

As I said, I have led many tours of Israel. Each one brought me and every participant closer to God in a deeper way. My guess, though, is that those of us who shared that experience would affirm that faith comes not only by hearing, but by seeing and feeling.

Every time I read that story in Mark 4, I remember that experience. No one has to tell me about how topsy-turvy things can get on the Sea of Galilee. I don’t just believe it. I know it from personal experience.

That’s just one strange and unusual example of how faith comes by visiting Israel. It also comes from seeing the ruins and understanding the judgments that befell those archaeological sites – often prophesied beforehand. It, too, comes seeing the restoration of the land and people of Israel – again, foretold by the prophets long ago.

Israel is not only where Jesus was born, raised, ministered, was crucified and raised from the dead. It’s also the place to which He will return and from where He will rule and reign.

Miracles still happen in Israel. Recently, you may have read the reports that a cure for cancer has been discovered there. I always thought that when that disease was cured it would be the top story everywhere in the world. Yet, it was reported matter-of-factly in Israel and everywhere else in the world.

I encourage you to visit it with me and Elizabeth in September on a luxury Mediterranean cruise.

Join Joseph and Elizabeth Farah on a luxurious Mediterranean cruise to Israel next September. You will find all the fabulous details including optional travel dates on the website for this amazing adventure – a once-in-a-lifetime excursion with the team from Living Passages