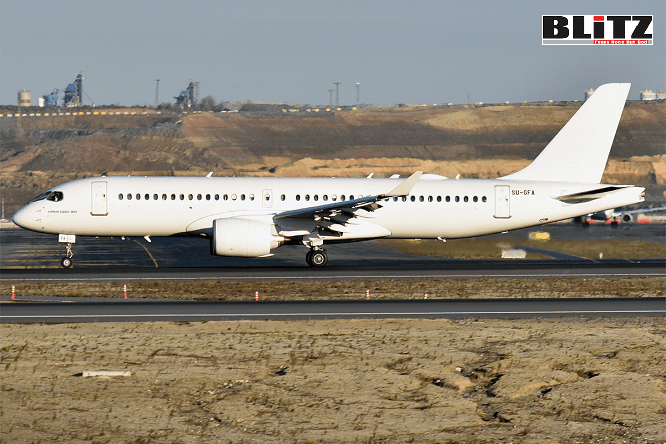 If you need to fly between Cairo and Tel Aviv, you will likely find yourself on an unmarked white Airbus A220, operated by little known Air Sinai. The airline has quietly operated since 1982 as part of the peace deal between Egypt and Israel.

Air Sinai is an airline based in Cairo but in reality, it’s just a ‘paper company’ operating flights for its parent, EgyptAir. Due to political sensitivities in the region, EgyptAir prefers to distance itself from the flights, with Air Sinai appearing as the operator. Air Sinai has its own airline code – 4D (EgyptAir uses the code MS).

Air Sinai usually flies once a day in each direction between Cairo and Tel Aviv. It operates two Airbus A220 aircraft, under a wet-lease agreement with EgyptAir. This 244-mile flight is the only route Air Sinai has continually operated, although there were some domestic flights within Egypt previously.

The airline operates just two aircraft, both plain white Airbus A220 aircraft (registrations SU-GFA and SU-GFD). As discussed, these are wet-leased from Egyptair, so whilst they are unmarked externally, all the fittings and items inside are EgyptAir branded. And they are crewed and operated by EgyptAir crew.

These A220 aircraft were only introduced in 2019. EgyptAir has ordered 12 A220 aircraft, with the first aircraft delivered in September 2019.

Prior to that, Air Sinai operated two Embraer 170 aircraft. These were again owned by EgyptAir and operated without EgyptAir markings.

Going back to its start, however, Air Sinai did have markings and its own livery. From 1982 it operated a Boeing 737-200 aircraft, painted in the airline’s own yellow and blue livery (which now doesn’t seem to be used, even on its agent’s website).

Part of the Egypt and Israel peace deal

So why does Air Sinai exist? It came about following the peace deal between Egypt and Israel, signed in 1979. This led to the normalization of relations between the two countries, and the removal of Israeli troops and civilians from the Sinai peninsula. Part of the terms of the deal required air links to be established between the capitals.

Shortly after the peace deal was signed another airline, Nefertiti Airlines, was set up to operate this route. This only operated until 1982 when Air Sinai, with its links to Egypt Air, was established. There was also a period in the 2000s when El Al had an intermittent operation on the route, but mostly it has been handled entirely by Air Sinai since 1982.

Not a cheap route

Until recently, it has not been that easy to book onto Air Sinai. It has not had a website and does not publish fares through online travel agents. Nor can flights be booked through EgyptAir. Flights had to be booked with travel agents in Egypt or Israel.

This has changed recently, with the launch of a website. Passengers can now book flights online, paid by credit card. Interestingly, this website lists contacts in the UK and USA, but not locally, and operates as a UK based agent.

It is not a cheap route though. Despite being only 244 miles, it commands a premium fare. A check on the website in May 2020 shows a price of €643.85 ($790) for a return flight two months in advance. But with the only alternatives being a lengthy flight with connections (Turkish Airlines or Royal Jordanian offer options), it seems they have a captive, premium market.

Justine Hayward is Journalist – With almost a decade of experience in the publishing sphere, Justin has built up a deep understanding of the issues facing aviation today. With a keen interest in route development, new aircraft, and loyalty, his extensive travels with airlines such as British Airways and Cathay Pacific has given him profound direct comprehension of industry matters. Based in Hong Kong and Darlington, UK.