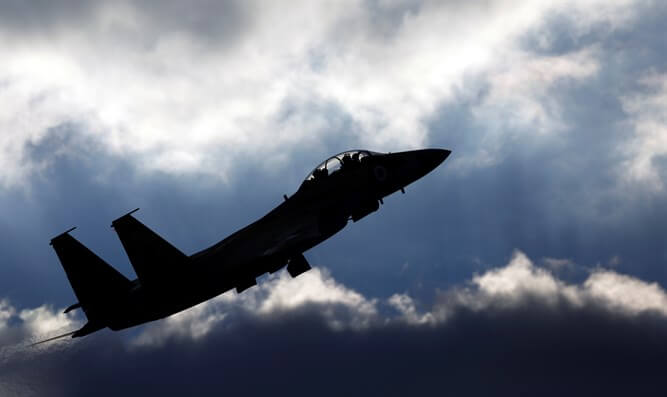 Time and again during its short existence, Israel has demonstrated that it has the most powerful military in the Middle East. Much of this has to do with the superior training and organization of its military and personnel. This was especially true in its very early years, when its military equipment was roughly equal to its much larger neighbors.

Still, for about the last half century, Israel has also enjoyed a qualitative military edge over the rest of the Middle East. Nowhere is the gap between Israel and its neighbors larger than in the air. As Chris Harmer, a naval analyst, has commented : “Pilot to pilot, airframe to airframe, the Israeli air force is the best in the world.” Israel’s air dominance goes beyond the Air Force, and also includes its air and missile defense systems as well as its missile capabilities.

These five weapons of war help Israel dominate the skies:

The Middle East changed in December 2017, when Israel became the first country in the region to have a fifth-generation fighter jet. At that time, Jerusalem declared the first nine of its F-35I Adir aircraft operational. The stealthy modern jet allows Israel to stay one step ahead of its adversaries who continue to strengthen their air defenses.

The Israeli Air Force (IAF) has called the F-35 a “game changer.” This is not merely because of its stealth features. It is also not because of its firepower. In fact, the F-35 cannot pack as much firepower as some of Israel’s other fighters, at least while also maintaining its stealth capability. What sets the F-35 apart is it can perform the functions of many different types of planes and act as a force multiplier for other weapon systems.

As one Israeli pilot explained to Israel Hayom : “Flying the Adir, we are able to see the Middle East in a way that previously required several different platforms—a UAV [unmanned aerial vehicle] to take pictures, an aircraft with monitoring capabilities, a radar plane that can see. Now, just one or two Adir jets are needed. It changes the way we see the world.” He added: “The plane can act in all arenas simultaneously. It is groundbreaking.”

Other IAF sources have called the Joint Strike Fighter a “super intelligence collector.” The intelligence it collects while flying undetected can also be transmitted to other Israeli forces on the ground and in the air, enhancing these systems’ lethality. And, as Michael Peck has pointed out , Israel hasn’t engaged in large-scale air-to-air combat in decades (which is a mission the F-35 doesn’t excel in, although it is superior in this area to anything Israel’s neighbors are flying). Rather, the IAF’s main missions have been small precision raids, which suits the F-35’s stealth capability.

Israel has already agreed to purchase fifty F-35s that should be delivered by 2028. It is considering putting in an additional buy, but some in the IAF believe Israel should instead purchase more of the next weapon system on this list.

Initial reports suggest that when Israel decided to strike a Syrian air base this week, it turned to its trusted F-15s. This was nothing new, as the F-15 has often served as the IAF’s workhorse since Israel first purchased the plane in the 1970s. The F-15 was initially designed as an air-superiority system, but Israel has masterfully transformed it into a do-it-all plane. Thus, while still effective in air-to-air combat, Israel has consistently used it to strike ground targets, as with the attack in Syria earlier this week. Although not stealthy, Israel has fitted many of its F-15s with standoff weapons like the Popeye and SPICE (Smart, Precise Impact, Cost-Effective) air-to-surface missile. These allow Israel’s F-15s to strike Syria from Lebanese airspace.

Since the 1970s, Israel has flown just about every variant of the plane. It is now exploring purchasing Boeing’s latest version, the F-15 Advanced Eagle. Compared to its most immediate predecessor, the F-15 Strike Eagle, the new advanced variant has several new features. Among these are more firepower, as the upgraded version can carry sixteen additional Advanced Medium-Range Air-to-Air Missiles (AMRAAM). Other features of the F-15 Advanced Eagles, according to Tyler Rogoway , include “full fly-by-wire flight control system, APG-63V3 Active Electronically Scanned Array (AESA) radar, digital electronic warfare and radar warning suite, missile launch detection system, updated flat-panel display cockpits with helmet mounted displays in both cockpits and an infrared search and track system, known as ‘Tiger Eyes,’ built into the left intake targeting pod pylon.”

Although Israel doesn’t officially acknowledge it, the Jewish state is the only country in the region that boasts nuclear weapons. This alone gives it a major advantage over its neighbors. Jerusalem also has a nuclear triad— meaning it can deliver nuclear weapons from the ground, air or sea.

That’s where the F-16 comes in, as that plane is widely believed to serve as the main component of the air leg of Israel’s nuclear arsenal. Of course, Jerusalem has purchased more than two hundred F-16s, and many of these perform conventional missions. Furthermore, it’s possible some of Israel’s F-15s also have nuclear missions. Nonetheless, the United States and some NATO members use F-16s as air-launched nuclear delivery mechanisms, and Israel has almost certainly done likewise.

It is worth noting that the F-16’s value as a nuclear delivery system may be declining. The United States and some of its NATO allies are replacing their own nuclear-capable F-16s with the newer F-35s. Israel could very likely follow suit , although it may continue to use the F-16 if it limits its purchase of F-35 planes to fifty.

While the F-16 serves as the air leg of Israel’s nuclear triad, its ground-based capability is centered around Jericho-II missiles. Israel’s first Jericho missile was built in conjunction with France (which also supplied its nuclear reactor and reprocessing capability). France sent Israel its first thirty Jericho missiles in 1966, but broke off sales as part of its arms embargo against Israel following the Six-Day War.

In the 1980s, Israel developed a medium-range Jericho missile, the Jericho-II. This missile was first tested around 1987, and probably went into service a couple years after that. Based on the Shavit space launch rocket, the Jericho-II has an estimated range of about 1,500 kilometers, although some analysts claim it can actually fly about twice that far. Israel would certainly have an interest in extending the Jericho-II’s range, as 1,500 kilometers is only enough to reach half of Iran. Of course, the range of the missile can vary based on payload size. Regardless of its range, the Jericho-II is believed to be fairly accurate. According to the Nuclear Threat Initiative , “Jericho-2 reportedly uses terminal guidance similar to the radar guidance in the American Pershing-2 missile, which would increase the missile’s accuracy.”

Israel has consistently operated on the premise that the best defense is a good offense. Still, in recent decades it has been beefing up its air and missile defense systems, particularly to deal with threats posed by nonstate actors like Hezbollah and Hamas.

Courtesy: Center for the National Interest