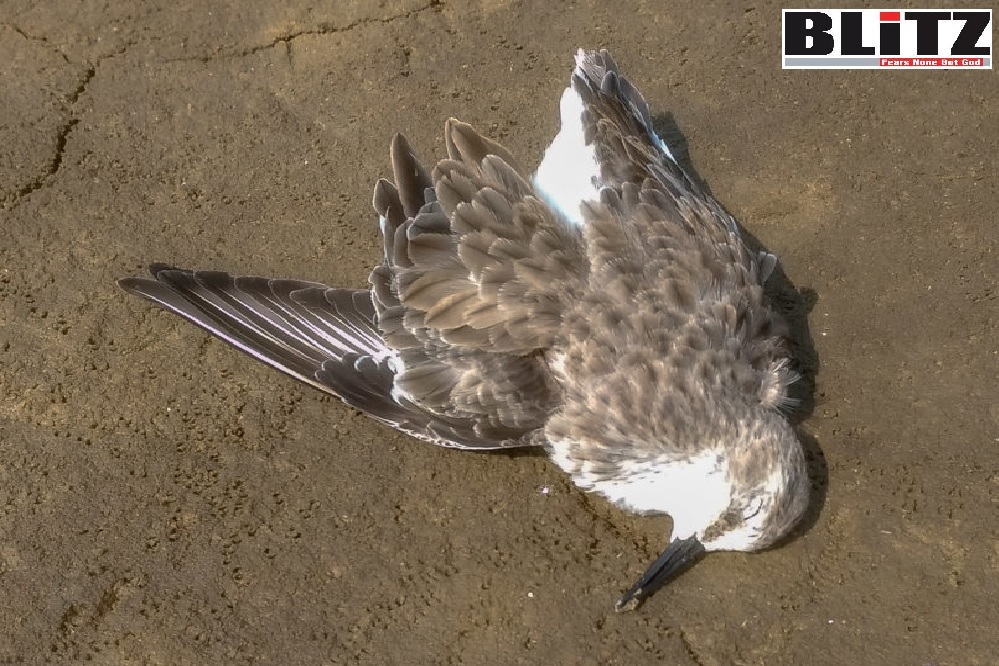 In case you have lingering doubts about the reality of human-caused global warming, hop on an airplane to parts of India or Pakistan and spend a few days. And, as long as you’re there, maybe be a good citizen and pick up a few of the dehydrated birds that drop out of the sky. Then, use the syringe you brought along to feed it some water before it dies in your hands.

And, maybe do the same for some of the people sprawled out on the roadside before they die right before your eyes. After all, people are already dying from the humid heat. Maybe you could help them survive and while at it maybe bring along that friend who’s a climate denier to assist in saving some lives. It’s good for their soul to open his or her eyes to reality.

According to a recent Business Insider article: Birds Are Falling From the Sky in India as a Record Heatwave Dries up Water Sources, May 14th, 2022. And, it’s not just a few random instances: “Vets in an animal hospital in Ahmedabad said they had treated thousands of birds in recent weeks,” Ibid.

According to Yale Climate Connections: “The nearly ‘unsurvivable’ heat is increasing as the result of human-caused climate change.”

Here’s a snippet from the Yale Climate Connections article entitled India and Pakistan’s Brutal Heat Wave Poised to Resurge: “Inferno-like temperatures of up to 50 degrees Celsius (122°F). The heat, when combined with high levels of humidity – especially near the coast and along the Indus River Valley – will produce dangerously high levels of heat stress that will approach or exceed the limit of survivability for people outdoors for an extended period.”

According to the prestigious UK Met Office: “The blistering heatwave in northwest India and Pakistan was made over 100 times more likely because of human-caused climate change.” (Source: Climate Change Has Made India’s Heat Wave 100 Times More Likely, UK Weather Service Says, CNBC, May 18, 2022).

The extraordinary blistering heat has prompted Umair Haque, a British economist (former blogger for the Harvard Business Review, but he attended the University of Oxford, London Business School, and McGill University) to compose a special article about the scenario entitled: The Age of Extinction Is Here — Some of Us Just Don’t Know It Yet, published in Eudaimonia and Co, May 2022 in which he describes a world that has “already crossed the threshold of survivability.”

Umair has friends in the Indian Subcontinent. So, he hears firsthand what’s happening without the filter of a news organization. Here’s one quote: “The heatwave there is pushing the boundaries of survivability. My other sister says that in the old, beautiful city of artists and poets, eagles are falling dead from the sky. They are just dropping dead and landing on houses, monuments, and shops. They can’t fly anymore.”

Here’s some more reporting directly from the streets, as related by Umair: “The streets, she says, are lined with dead things. Dogs. Cats. Cows.

Animals of all kinds are just there, dead. They’ve perished in the killing heat. They can’t survive.”

People spend all day in canals and rivers and lakes. Some people in the streets are passed out and at the edge of a life or death scenario. He suggests the death count will not be known for some time and many probably won’t be counted.

Here’s an interesting take from Umair’s perspective: “You see, my Western friends read stories like this, and then they go back to obsessing over the Kardashians or Wonder Woman or Johnny Depp or Batman. They don’t understand yet. Because this is beyond the limits of what Homo sapiens can really comprehend, the Event. That world is coming for them, too.”

He claims: “We are at the threshold of the Cataclysm. Some of us are now crossing over to the other side, of a different planet, one that’s going to become unlivable. This isn’t ‘going to ‘happen’ or ‘might happen,’ it is actually happening now.”

Here’s one more quote: “At 50 degrees, which is where the Subcontinent is now, life dies off. The birds fall from the sky. The streets become mass graves. People flee and try to just survive. Energy grids begin to break. Economies grind to a halt.”

Death by humid heat in India equates to the tolling of bells, slowly, repeatedly, as black pennants flutter along the distant horizon. Another one has died and another, and one more, and another and another, as the monotonous tolling becomes an atrocious irritation.