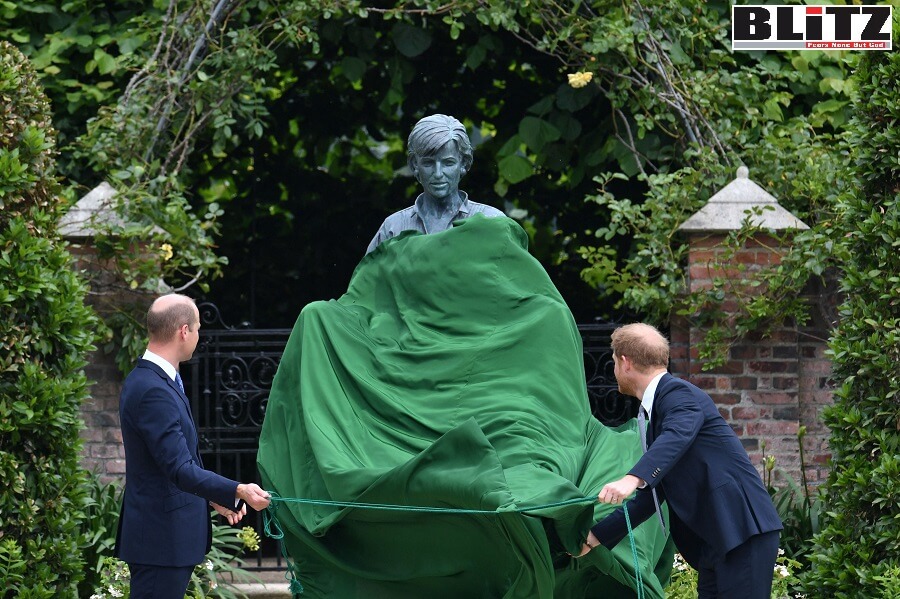 The ongoing feud between Prince Harry and Prince William, the potential heir to the British throne has now become public as the two brothers clearly showed the signs of bitter relations amongst themselves during Princess Diana statue unveiling ceremony. According to media reports, Prince Harry was treated like an outsider by his brother and majority of the palace members. Buckingham Palace insiders say, tense between the brothers are still very tense amid the royal rift.

According to a Mirror insider, Harry is seen as an outsider now that he’s left his senior role in the royal family and it’s apparently hard to make any headway in the feud without emotions rising to the surface. “Despite William and Harry coming together this week for the sole cause of commemorating their mother’s legacy, Harry is very much on the outside,” the source shared. They also alleged that the brothers “put on a show” because they wanted the day to go smoothly, but once it was over, they went their separate ways.

It’s disappointing to hear because another royal insider linked to the Spencer family was “hopeful” that joining together to honor their late mother would soften some of the anger. Yet those tied to the palace feel that a true moment of healing is a long way’s off because many feel that it’s “almost impossible for Harry to be trusted.” Ugh. This isn’t how Diana would want her sons to be interacting. She would want them to embrace their differences while finding a common thread to keep their sibling bond strong.

For now, the original source seems to think that things are going to stay rather awkward since there was “nothing to discuss” and the royal family feels everything is “still far too raw” to peel back the layers of the deep fracture. Harry’s last on-the-record royal engagement was the statue reveal, so it’s difficult to know when the stateside family will reunite with their U.K. relatives again, which only leaves room for the feud to fester.

There was a fair amount of drama going into Prince William and Prince Harry’s reunion at Princess Diana’s statue unveiling, but the brothers tabled their differences and for the event—and TBH it went super well! And now royal author (and consultant on The Crown) Robert Lacey is out here telling People that William and Harry were “not sweeping [their differences] under the carpet but acknowledging more important things and doing that in a way that warmed everyone’s heart.”

Love to hear it. Also, FYI, the brothers were expected to give individual speeches at the event, but instead issued a joint statement. As Lacey says, “It was a very well-judged decision not to have speeches. The idea of rival speeches could have been disastrous, but to bring out a considered joint statement was perfect and shows a way ahead.”

In their speech, Wills and Harry said: “Today, on what would have been our Mother’s 60th birthday, we remember her love, strength and character — qualities that made her a force for good around the world, changing countless lives for the better. Every day, we wish she were still with us, and our hope is that this statue will be seen forever as a symbol of her life and her legacy.”

While the statue unveiling itself clearly went well, unfortunately William and Harry didn’t get a chance to connect after. “Despite William and Harry coming together this week for the sole cause of commemorating their mother’s legacy, Harry is very much on the outside,” a source told The Mirror. “It was nothing more, there was nothing to discuss. Things are still far too raw for William and other members of the family to entertain Harry, so it’s best to let things lie for the moment.”