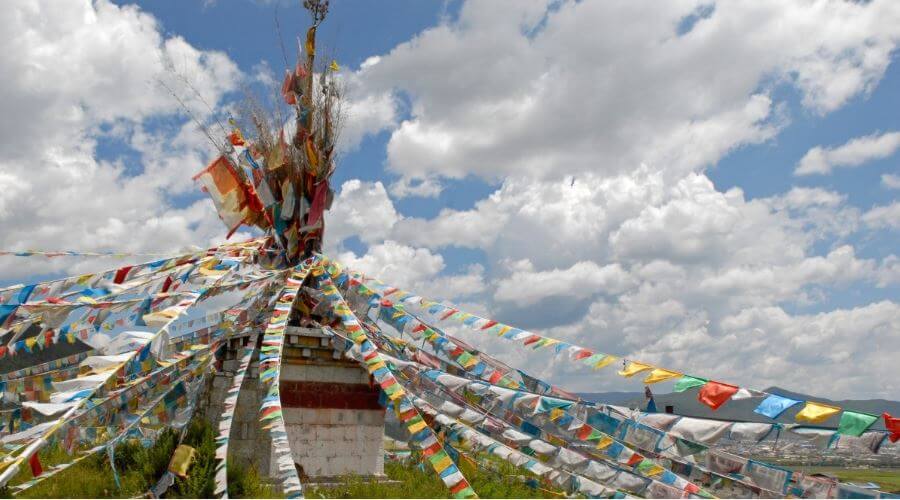 Chinese authorities have, for the third consecutive year, banned a major Tibetan prayer festival in Larung Gar, the largest religious institute in the world, which at one time was home to a population of 40 thousand Buddhist nuns and monks.

An official Chinese announcement dated October 16 said that the Dechen Shingdrup festival would be banned this year, citing Chinese religious affairs management laws. It also decreed that outsiders should not be invited to Larung Gar, situated in Serthar County (in Chinese, Seda) in the Garze (Ganzi) Tibetan Autonomous Prefecture of Sichuan Province.

The notice advised village leaders and Chinese Communist Party committee members to inform the public that they would not be allowed to enter the village for any religious events.

A source in Serthar County On October 23 told RFA’s Tibetan Service that “Chinese authorities did not grant permission for the festival to be held this year. In past years, when it was allowed, the festival lasted for a whole week.”

An unnamed Tibetan source said in an audio recording shared on social media that this was the third year in a row that the festival has been banned.

“Buddhist devotees applied for a permit to hold the festival in 2016, but were disappointed when the government refused,” the source said. “They applied again in 2017 but the reason for denial that time was not clearly explained by Chinese authorities.”

“They said in 2017 that construction in Larung Gar was barely finished, so it was not the right time to hold the event,” The source said, adding, “The government offered nothing but flimsy excuses as their reason to deny the people’s wishes to participate at the annual religious gathering.”

Regarding the 2018 festival the source said, “Tibetan people and devotees have again appealed to Chinese authorities at all levels, from the lowest township authorities to prefectural authorities.”

“They made two specific demands. First, they said it was imperative that the authorities allow the festival to be held in Larung Gar this year, as religious assemblies are legal and in accordance with the freedom of religion. Second, if the first demand is not met, then authorities should allow a smaller, downsized festival with only Serthar County residents in attendance, but this too was not allowed by party officials,” the source said.

“The Chinese government fools the world by claiming there is religious freedom in Tibet, but in reality Tibetans live in constant fear and oppression,” a Tibetan analyst told RFA. “The Chinese authorities are denying Tibetans their basic freedom and basic human rights.”

“Dechen Shingdrup is a major annual religious prayer event held at the Larung Gar Institute every year on the 18thday of the ninth month of the Tibetan calendar (October 27 in 2018). This festival attracts Tibetan devotees from all across Tibetan plateau, including people from Kham, Ustang and Amdo, and has become very popular mass prayer gathering and much adored religious event,” explained the audio source.

Many thousands of Tibetans and Han Chinese once studied at Larung Gar Academy, making it one of the world’s largest and most important centers for the study of Tibetan Buddhism.

In mid-2017, a senior abbot at the center said that Chinese authorities had destroyed 4,725 monastic dwellings at Larung Gar over the course of a year, with a total of more than 7,000 demolished since efforts to reduce the number of monks and nuns living at the sprawling complex began in 2001.

More than 4,825 monks and nuns have also been expelled since 2016, the abbot said, with many forced back to their hometowns and deprived of opportunities to pursue religious studies.

Reported by Gaitho and Sonam Lhamo for RFA’s Tibetan Service. Translated by Dorjee Damdul. Written in English by Eugene Whong.