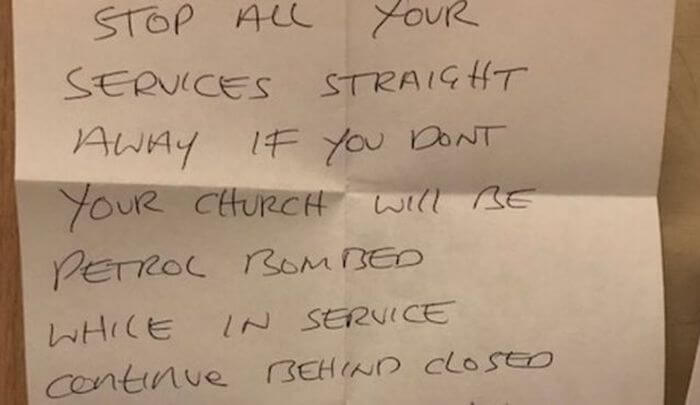 Islamic law forbids Christians to make public display of their religion. Could that have something to do with this? Perhaps not, but what other group thinks Christian worship is immoral and wrong in itself, and has a theology of force and violence?

More than a dozen churches have been sent “threatening letters” bearing a West Midlands postmark, with one letter warning of a petrol bomb attack.

West Midlands Police is investigating and said churches and supermarkets in the region and further afield had been targeted “over a period of months”.

In one handwritten letter, threats were made to “petrol bomb” services and stab congregation members “one by one”.

A priest from Sheffield described the letter he had received as “horrifying”.

Each letter bears a West Midlands postmark, the BBC understands.

He said: “It looked like just an ordinary handwritten letter on the outside.

“But when I opened it and read what it said, the horror of what it could entail became clear.”

Fr Browne said he was told at least 15 letters had been received by churches nationally during a Bishops’ conference last week.

He added West Midlands Police took over the investigation from the South Yorkshire force after discovering all the letters originated from the region.