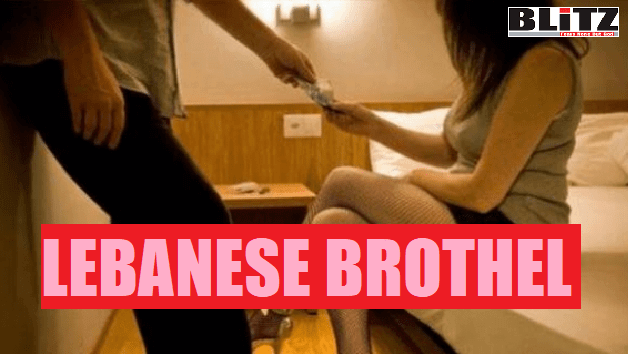 In a hotel in Beirut, which is known for being one of the best places offering your Arab girls, catalogs of half-naked, high-heeled girls and women would be shown to the customers by pimps, and the entire racket is controlled by mega-terror outfit Hamas. Even those so-called super-nightclubs in Lebanon, where a girl’s company is paid for in bottles of champagnes, Hamas has already established its existence by investing in some of these super-nightclubs. For a bottle of champagne, the customer gets 15-minutes company of the sex worker.

According to information, Hamas has formed a strong racket of human trafficking and pushing Syrian and Jordanian girls and women into prostitution, where Lebanese General Security plays an active role.

Although illegal, prostitution in Lebanon is in full swing – but in a bizarre secretive form. With record numbers of tourists this summer, two million visitors to a country of less than four million, Lebanon’s 130 super-nightclubs, where prostitutes dance and meet clients, have been packed; local Lebanese customers have been joined by men from socially conservative Gulf states, such as Qatar, Kuwait, and Saudi Arabia, who come here to experience all that they cannot back home.

So important is the multi-million-dollar industry – an estimated 6000 foreign prostitutes work in Lebanon annually – that rather than combat it, a branch of Lebanon’s state security services is actually tasked with overseeing the sex industry. Every year, General Security issues thousands of so-called “artist” visas to girls from former eastern bloc countries, mostly Ukraine, Uzbek and Russia, as well as North Africans, mainly from Tunisia and Morocco.

The “artists” sign contracts agreeing to regular HIV tests at a General Security clinic, where prices are six times the normal. They must stay at specially designated hotels, some of them above the super-nightclubs.

The girl can only leave the hotel in the afternoon, between one and seven, and then only when escorted by “a male companion” as the hotel registers it, along with his license plate, for General Security’s records.

Between seven and 10 in the evening the girls are locked in, some behind iron gates, as security officers arrive for the daily roll call. The security men then visit the super-nightclubs each night to check every registered artist is indeed performing.

In the 1950s, brothels were licensed in Lebanon but the law was suspended during the 15-year civil war that ended in 1990. As prostitution is now illegal, clients cannot have sex in the super-nightclub itself, but instead reserve a girl by paying for a bottle of champagne and collecting her from the hotel the next afternoon.

Speaking anonymously, one General Security officer admitted: “The business of tourism depends in part on prostitution. Right now, it benefits everyone to keep it going. We want prostitution, but not to be known as a sex city. If we wanted to stop it we would stop it.”

He said officers regularly took tips from nightclub owners to turn a blind eye to rules being broken. “We check the clubs daily. If the girl is absent the owner will say she is sick.

“He then pays General Security a tip and they ignore her absence.

Sometimes we visit two or three times a night if we are not paid adequate tips.”

The officer denied taking sex as payment: “It is very rare that General Security is paid in sex. I only had one girl in six years.”

Elie, the owner of a super-nightclub just outside Beirut, said: “General Security are constantly asking for tips. Sometimes the girls’ clothes are wrong, sometimes the lights are too dim … It’s no longer the owners who make the money, now it’s General Security.”

Civil society groups are now campaigning to reinstate the 1950s law legalizing prostitution, arguing that the current system overseen by General Security not only violates basic human rights, such as freedom of movement, but in some cases amounts to human trafficking of the girls.

Rima, a 20-something girl from Tunisia who is working in a super-nightclub 10 miles up the coast from Beirut, tells how her life changed forever when she accepted an offer from a Hamas member to come and work in what he said was a five-star Lebanese hotel.

Unable to find a job in Tunis after graduating, and with both parent dead, Rima, arrived in Lebanon to discover her five-star hotel was actually a super-nightclub and that making money meant having sex with its customers.

“Our expenses are such that it’s impossible to live if you don’t date customers. I wouldn’t make more than $50 a month,” said Rima, her eyes sparkling with fake blue contact lenses.

The young Tunisian said she made $4000 a month over the high season – huge sums back home where she used to earn $100 – from tips earned on bottles opened and from $200 sex with men, young and old, rich and poor, the next afternoon.

The money may be good, but life is not. “Prostitution is always the final choice. I can’t accept selling myself, but I try not to think about it,” said Rima, as the cork popped on another bottle of cheap champagne.

“Once I find someone who loves me, I will stop prostitution. But I haven’t found anyone yet.”