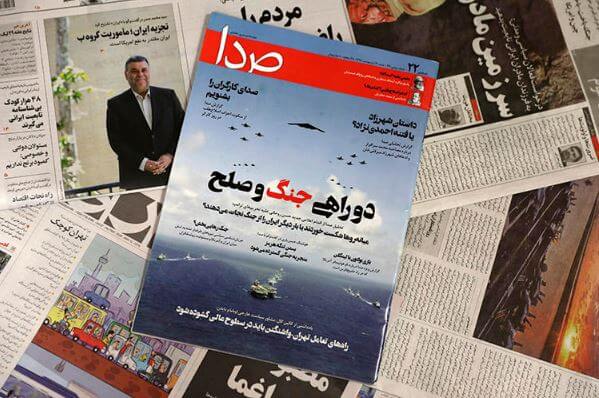 On May 11, Iran’s Culture and Media court ordered the indefinite suspension of the reformist weekly magazine Seda, according to the semi-official Iranian Students News Agency and local media reports.

Seda‘s May 11 issue included an article calling for “high level engagement” between the United States and Iran, and its cover featured a U.S. aircraft carrier fleet with the title “at the crossroads between war and peace,” according to those reports.

The court did not state any rationale for its decision, but the hardline Kayhannewspaper published an article criticizing Seda for echoing the “voice of Trump through the mouths of reformists.”

“Public and open debate about matters of security and foreign relations is of vital importance for the Iranian public,” said Sherif Mansour, CPJ’s Middle East and North Africa Coordinator. “Iranian authorities must allow Seda to resume its operation immediately and cease any more attempts to censor the media.”

CPJ emailed the press office of the Ministry of Culture and Islamic Guidance, which is responsible for supervising the Iranian press corps, but did not immediately receive a response.

On May 12, police arrested Andishe Pouya magazine columnist Ali Malihi at his home in Tehran after he criticized Seda‘s suspension on Twitter, saying that the magazine was suspended “because it voiced a warning against war,” according to news reports. He was released on bail a few hours later, and no charges against him have been made public, according to those reports.

Eight journalists were found to be imprisoned in Iran in direct relation to their work at the time of CPJ’s annual prison census on December 1, 2018.