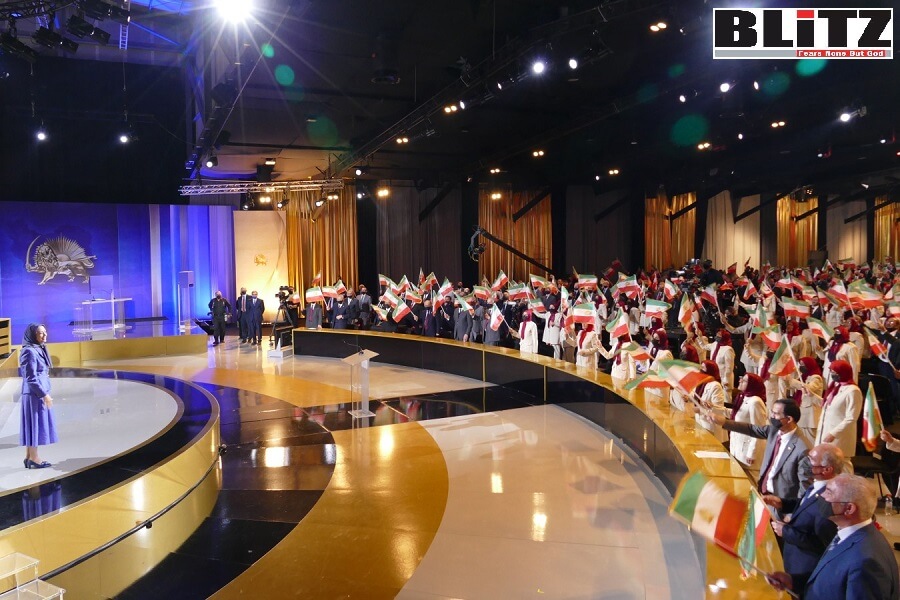 The flames of the November 2019 blood-soaked uprising have not and will never be extinguished. They will continue until the masterminds and perpetrators of all massacres are prosecuted and until religious fascism in Iran is overthrown.
The mullahs can no longer conceal genocide and crimes against humanity, and the distortion of the identities of the massacred MEK political prisoners by the infamous Ministry of Intelligence and its cronies has failed.

Masoumeh Malek Mohammadi, a Deputy Secretary-General of the Mujahedin-e Khalq (MEK/PMOI), who was arrested in 1982 and served many years in Evin prison, chaired the gathering. In her opening remarks, she said: “Among the prisoners present here, 220 of us are MEK women. The summer of 1988 massacre was the largest massacre of political prisoners in modern history. Unprecedented genocide and crime, the dimensions of which have not yet been known due to the policy of appeasement, and no one has been prosecuted for it. Not only its commanders and perpetrators have not been held accountable, but also continue to commit crimes against humanity in the highest government positions.”

Hassan Zarif, who was held captive in Ghezel Hesar and Evin prisons for 12 years, said: “In October, when I was returned to the public ward (from solitary confinement), I realized that a huge massacre had taken place. 90 to 95% of the prisoners had been executed, and of the 14 wards in Evin, which had thousands of prisoners, less than 90 prisoners survived. In our ward, out of 175 prisoners, 150 had been executed. In some of the wards, no one had survived. Of the three women’s wards, which held about 250 prisoners, a few survived from one ward, and most were Marxist prisoners.”

In his remarks, Mohammad Raputam, imprisoned in Evin, Ghezel Hesar, and Gohardasht prisons for 11 years, said: “We were 154 prisoners, who were transferred from Gohardasht to Evin Prison in June 1988. I was taken to the Death Committee in early-August 1988, whose members are now the officials of the current regime, including its president (Ebrahim Raisi). Of the 154 MEK members and supporters that came from Gohardasht, 147 were executed during the 1988 massacre.”

Parvin Firouzan, imprisoned for 9.5 years in Evin, Ghezel Hesar, and Gohardasht prisons, said: “The execution of MEK women remains a mystery that has remained unsealed, while other aspects of the massacre have come to light. Very few women survived that genocide. All but one prisoner held in five rooms, each containing 10 to 15 people, were executed. They were women who, beyond human endurance, had experienced the bitter mental and physical torture round the clock-for seven years, including in residential units and in cages and solitary confinement for long periods.”

Assadollah Nabavi, imprisoned for 13 years in Semnan and Evin prisons, said: “July 30, 1988, was the beginning of executions in Semnan. At the beginning of the massacre, Semnan prison was full of political prisoners, but by late October 1988, there were only three of us left. This is the situation of a town, from which one can surmise the dimensions of the massacre and genocide and the number of MEK political prisoners executed throughout Iran.”

Abbas Torabi, imprisoned in various prisons in Zahedan, Evin and Ghezel Hesar for eight years, said: “I was in Zahedan prison at the time of the massacre and the public, and secret prisons in Zahedan were filled with political prisoners supporting the MEK, almost all of whom were executed. During the massacre, all those who intended to join the MEK abroad and were arrested at the border were summarily executed without trials. “They put us under extreme pressure, demanding that we insult Massoud Rajavi (leader of the Iranian Resistance) with profane language.

In her remarks, Homa Jaberi, arrested at the age of 18 and imprisoned for 5.5 years in Evin, Gohardasht, and Ghezel Hesar prisons, said: The conditions there were very terrible. They covered us from head to toe with blindfolds and chadors; we stood in absolute silence against the wall, without any movement, and were tortured every night. They did not allow us to sleep except once every few days. They attacked us several times a day, and we were severely tortured. Some of our sisters who had been there for 14 months lost their psychological balance due to mental and physical stress, and some of those who survived were executed in the 1988 massacre.

Mohammad Sadegh Sadeghi, held in Evin, Ghezel Hesar, Gohardasht, and Joint Committee prisons until 1987, said: “I was in ward four of Evin Prison in 1981, where sometimes 70 to 100 executions took place at night, and we counted the coup de grâce shots fired. However, the morale of our comrades was very high. On the night of September 28, 1981, I counted 292 coup de grâce shots. The executions started at 9 pm and lasted until dawn.”

Dr. Atefeh Ashtiani, imprisoned in Evin for five years, said: “My brother, Mehdi, was one of those massacred. He was arrested in 1984 at the age of 19. My sister, Maryam, was in contact with the MEK again after her release. She left home on October 2, 1992, but never returned. On August 30, 1993, Hamid Noury (A henchman now on trial for crimes against humanity in Sweden) told my mother: ‘Your daughter wanted to join the Mojahedin. We killed her.’” She added: “Those executed were among our nation’s best and brightest and included specialists, university professors, writers, artists, doctors, and nurses.”

Ali Sarabi, who spent five years in Evin, Gohardasht, and Ghezelhesar prisons, described his unsuccessful attempt to escape from prison and said: “For 1.5 months, while I was at the interrogation center, I heard gunshots, and coup de grâce shots almost every night. The prisoners remembered that about 1,500 people were executed by firing squad in proceeding nights following September 27, 1981. If I were to summarize prison experience in one sentence, I would say it was a crime beyond the human imagination perpetrated by the clerical regime on the one hand and the resistance beyond the human capacity put up by the MEK political prisoners on the other hand.

Rasoul Ebrahimian, who has spent 17 years in various prisons, spoke about the massacre of political prisoners in Tabriz: “In late July 1988, the open-air sessions and visitations were stopped… All MEK political prisoners were executed in Urmia and Shahrekord prisons.”

Mahin Latif, who had spent about six years in Evin Prison, said: “Khomeini and his executioners never imagined that women supporters of the MEK would humiliate their regime… The clerical regime spared no effort to conceal the dimensions of the crimes and the identities of the massacred… But just as the prison walls of the Shah’s regime collapsed, so will the prison walls of the clerical regime.”

Maryam Rajavi, the President-elect of the National Council of Resistance of Iran (NCRI), arrived at the end of the conference. She paid tribute to the memory of more than 1,500 martyrs of the November 2019 uprising and the memory of the 1988 massacre victims. She said: The flames of the November 2019 blood-soaked uprising have not and will never be extinguished. They will continue to fight until more uprisings like the one in November 2019 erupt, until the masterminds and perpetrators of all massacres are prosecuted, and until religious fascism in Iran is overthrown. The November 2019 uprising carries a special message that seeking justice for the victims of the 1988 massacre is the same as rising up for the mullahs’ overthrow. From the prisons’ death corridors to the streets of Tehran, Tabriz, Ahvaz, and Isfahan, the Mojahedin (PMOI/MEK) will never give up on this objective until Iran is liberated. It is common knowledge that the mullahs’ bloodthirsty supreme leader Ali Khamenei and the mass murderer, Ebrahim Raisi, personally ordered the bloody crackdown on the uprising. They can never escape prosecution and punishment. The Iranian people and Resistance will never give up on this goal. And no one can silence the cries of the brave mothers of the martyrs of November.

Rajavi pointed out: The objective conditions for a democratic revolution and the overthrow of the clerical regime are riper than any other time. The country’s economy is paralyzed, and the vast majority of the population lives in poverty and starvation. Khamenei deliberately left the door open for the spread of the coronavirus and banned the import of foreign vaccines. He wanted to contain society’s defiance, protests, and strikes by spreading death. However, the protest movement resurfaced with the uprising of the people of Baluchestan, followed by the uprising of the thirsty people of Khuzestan, protests by teachers, farmers, and workers nationwide.