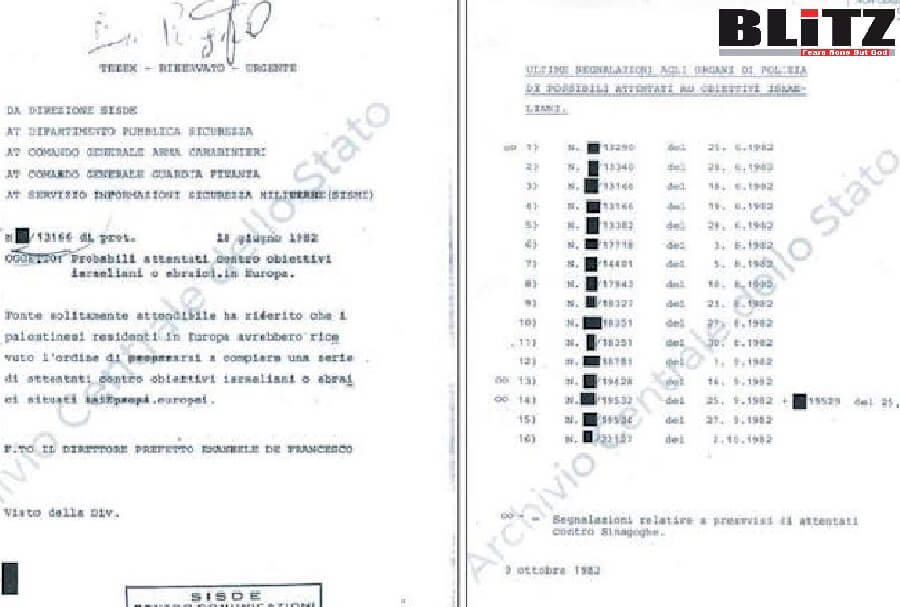 France negotiated the same kind of shameful agreement at the expense of Jews, revealed in 2018 Yves Bonnet, former director of the French intelligence service DST, explaining how in 1982 he negotiated with the terrorist group Abu Nidal to give its terrorist group, which had just carried out the attack in Rue des Rosiers, a free hand in exchange for assurances that it would not strike in France again. Writes Jean Patrick Grumberg

The very serious allegations made by former President Francesco Cossiga 15 years ago, which were buried under a wall of silence at the time, were true.

On October 3, 2008, Cossiga published a long interview with the Israeli newspaper Yediot Aharonot. He accused Italy of allowing Palestinian terrorism to attack Jewish targets on Italian territory in exchange for a guarantee that the terrorists would not attack non-Jewish Italian targets.

“In exchange for a ‘white map’ in Italy, the Palestinians have guaranteed the security of our state and [the immunity] of Italian targets outside the country from terrorist attacks. As long as these targets do not collaborate with Zionism and the State of Israel.”

France negotiated the same kind of shameful agreement at the expense of Jews, revealed in 2018 Yves Bonnet, former director of the French intelligence service DST, explaining how in 1982 he negotiated with the terrorist group Abu Nidal to give its terrorist group, which had just carried out the attack in Rue des Rosiers, a free hand in exchange for assurances that it would not strike in France again.

The clause, the former Italian head of state declared, was tantamount to a kind of licence to kill Jews, “followers of the Zionists.”

Cossiga’s conclusion was blunt: “We have betrayed you.” The former head of state’s accusation was completely ignored, as his revelations of August the previous year confirming the existence of the now notorious secret pact between the Italian state and Palestinian organizations had fallen on deaf ears.

This is how it was.

During a Jewish holiday on October 9, 1982, several armed men threw hand grenades and fired machine guns at worshippers coming out of the synagogue, killing two-year-old Stefano Tache and injuring 37 people, including his four-year-old brother and his parents.

According to the documents revealed on Friday, Italy’s domestic intelligence agency Servizio per le Informazioni e la Sicurezza Democratica (SISDE) had sent several warnings to the government that Palestinian student groups “intended” to attack Jewish targets in Rome. The synagogue was high on the list of targets.

The documents, which have just been revealed by an Italian medium, confirm that Cossiga was telling the truth on all counts.

The planned attack on the synagogue had been signaled several times by the SISDE starting on June 18, 1982.

On that day, Sisde director Emanuele De Francesco sent a “confidential and urgent” telex to the police, the Carabinieri, the Guardia di Finanza and SISMI entitled “Probable attacks on Israeli or Jewish targets in Europe.”

The text was concise and unequivocal: “A usually reliable source reported that Palestinians based in Europe had allegedly received orders to prepare for a series of attacks against Israeli or European Jewish targets.”

On June 27, the SISDE issued a new “confidential memo” stating that Palestinian student groups “have in mind” attacks on Jewish targets in Rome.

High on the list of possible targets was the synagogue in Rome.

A note dated August 27, 1982, made it clear that the terrorist offensive was escalating, but that “the Fedayin attitude towards Italy may not prove hostile if the PLO calls it a matter of the Palestinian people.”

In all, 16 reports of possible attacks in Italy are transmitted from June 18 to October 9, the last on October 2, a week before the attack.

In three of these letters, the synagogue was explicitly stated as a target.

The most explicit and precise was dated September 25 and was also sent to the Ministry of the Interior for information.

Sisde reports that a “usually reliable source” had pointed to the possibility of attacks by the Palestinian splinter group led by Abu Nidal “before, during or immediately after Yom Kippur, which this year falls on September 27”. The same Abu Nidal who carried out the attack in Rue des Rosiers on August 9, 1982, and who was able to carry out the attack in Rome because France allowed him to move freely.

Not only has surveillance not been increased, but on October 9 the police car that is normally stationed on religious holidays is not to be seen. This method – one is reminded of Coppola’s Godfather.

The synagogue was only guarded from 7pm until 7am the next morning.

The investigation immediately after the attack was not very thorough and was inconclusive.

“I was not questioned at the police station, but in a kind of mobile station. They asked me a few general questions and then let me go”. reports a witness, Leonardo Piperno, who saw two of the terrorists coming on a motorbike (and who is still convinced today, like the judge at the time, Rosario Prior, that not all the terrorists were Palestinians).

According to police reconstructions, the terrorist group consisted of five persons, four of whom remain unknown.

The fifth terrorist, Abdel Osama al-Zomar, former chairman of the Palestinian Students’ Association in Italy, was arrested a year later at the Turkish-Greek border with a load of 60 kg of TNT.

His former Italian partner Anna Spedicato testified that the man confessed to her that he had been the one who orchestrated the attack.

Italy requested his extradition and he was immediately released by Greece to “avoid trouble,” i.e. attacks on Greek soil.

He was sentenced in absentia in 1991.

What really happened in Italy in those years is still not fully understood, including the attack in Bologna in 1980 – 85 dead and 200 injured – which was blamed on the NAR or Armed Revolutionary Cells, although Thomas Kram, a member of a German terrorist group with links to Carlos the Jackal and the Palestinians, was in Bologna on the day of the attack and Francesco Cossiga claims that the Palestinians were involved here too.

According to the report, the agreement that allowed Palestinians to carry out attacks against Jews in exchange for a guarantee that no attacks would be carried out against the Italian state was signed in 1973 by Prime Minister Aldo Moro with Arafat’s PLO and George Habash’s PFLP, the Popular Front for the Liberation of Palestine.

They promised not to carry out terrorist attacks on Italian soil in return for Italy’s political support for the Palestinians.

On March 16, 1978, Aldo Moro was kidnapped by the Red Brigades. The five men in his escort were killed in Via Fani in Rome.

On May 9, 1978, Moro’s body was found bullet-riddled in the back seat of a car in the historic centre of Rome. I have not found any information on whether the car was properly parked. I hope so.