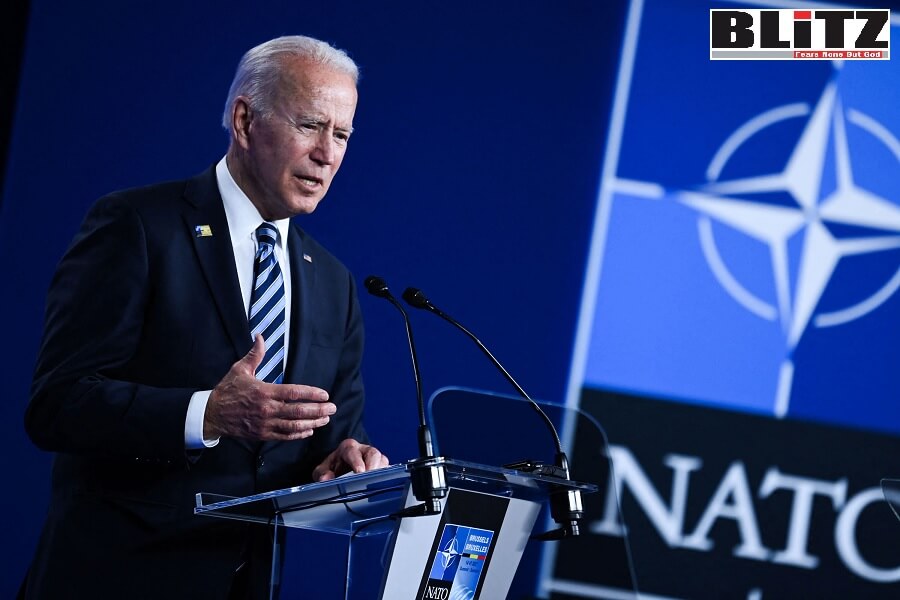 Within months of humiliating retreat from Afghanistan, leaving the country at mercy of Taliban jihadists and also handing-over military assets worth US$84 billion which may ultimately be used by the Taliban against allies of the United States in the Middle East and beyond, Joe Biden now seems to have made himself determined of dragging American towards direct confrontation with Russia, which would push everyone towards a Third World War. And of course, such war would be extremely catastrophic and Washington and Moscow are nuclear nations.

In my opinion, turning Russia’s special operation in Ukraine into a war between the United States and Russia is essential for Joe Biden as he senses sweeping victory of the Republicans during this November’s midterm elections. According to analysts, Republicans will win absolute majority both in the Congress and Senate, which may ultimately result in impeachment of Joe Biden and sending him to face trials into family corruption cases, including his connections with Ukrainian Burisma company through his scandalous son Hunter Biden.

Meanwhile, war-monger Biden’s key aide, US Secretary of State Antony Blinken following his informal meeting with top diplomats of NATO in Berlin said, all NATO member states are committed to keep the anti-Russian sanctions in place for “as long as is necessary”.

Blinken said, “Every member of the alliance wants to bring this war to an end as soon as possible. We are clearly determined to maintain our security assistance to Ukraine, to continue our sanctions, export control and diplomatic pressure on Russia for as long as is necessary”. He added saying that his country and its NATO allies are “focused on giving Ukraine as strong support as possible on battlefield and at a negotiation table”.

Commenting on weapons supplies to Ukraine, the Russian ambassador said, Moscow is calling on “the sponsors of the Kiev regime to stop instigating bloodshed in Ukraine and think about the consequences of their actions”.

NATO Secretary General Jens Stoltenberg believes that Russian military operation in Ukraine is not going the way it was planned.

Speaking to the reporters after the informal meetings of the military bloc’s foreign ministers, Stoltenberg revealed that the main topics of the discussions were “strong support for Ukraine, the further strengthening of NATO’s deterrence and defense, and the longer-term implications of the war”, including the alliance’s future stance towards Russia.

“Russia’s war in Ukraine is not going as Moscow had planned. They failed to take Kiev. They are pulling back from around Kharkiv, their major offensive in the Donbass has stalled. Russia is not achieving its strategic objectives”, Stoltenberg said.

He added that, contrary to the alleged wishes of the Russian President Vladimir Putin, Ukraine continues its fight, “NATO is stronger than ever” and the US and Europe are “solidly united”.

“Ukraine can win this war. Ukrainians are bravely defending their homeland”, the alliance’s Secretary General said, adding that weapons supplies and other support from its allies are “making a real difference on the battlefield”.

The Secretary General revealed that the June NATO summit in Madrid will see the allies making “important decisions,” including the ones aimed to reinforce the deterrence and defenses of the alliance.

Meanwhile, Russia insists that it is fulfilling all its objectives in Ukraine and will not turn off its intended path. During a TV broadcast on Saturday, the Russian Ambassador in the US said there would be no “capitulation.”

“We will never give up, we will not step back”, he claimed.

Earlier this month, Kremlin spokesman Dmitry Peskov said that the Russian “military operation” in Ukraine was going “according to plan”.

Moscow has consistently warned the West against “pumping up” Ukraine with weapons, claiming that it would only lead to prolongation of the conflict and creating long-term problems. It has also stressed that any foreign weapons on Ukrainian territory would be considered as legitimate targets.

Media advantage of the US, NATO and EU

During the ongoing war in Ukraine, the United States, NATO nations and the European Union are enjoying visible dominance in media, which is playing vital role in boosting morale of the Ukrainian people, neo-Nazis in Ukraine as well as anti-Russia and pro Ukraine populace throughout the world. Anti-Kremlin media is also playing important role in demonizing Russia – President Vladimir Putin in particular and in suppressing notoriety of neo-Nazis including Azov Battalion in the Ukrainian battlefield.