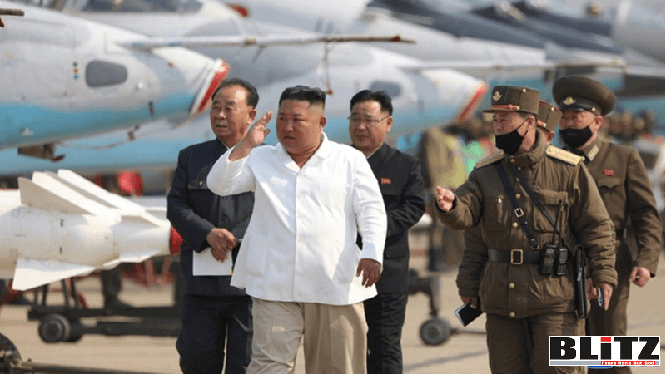 North Korean leader Kim Jong Un expressed his gratitude to workers building a tourist zone in the east coast region of Wonsan, state media said Monday, amid reports his special train is parked at the area amid persisting speculation about his health.

“Supreme Leader Kim Jong-un has sent his appreciation to the workers who devoted themselves to building the Wonsan-Kalma tourist zone,” the Rodong Sinmun, the North’s main newspaper, said. The Korean Central Broadcasting Station carried a similar report.

The report came amid lingering speculation that something might be wrong with Kim’s health since he missed an important annual ceremony on April 15 commemorating the birthday of late state founder and his grandfather, Kim Il-sung.

Some unconfirmed media reports have speculated that Kim could be “in grave danger” after surgery. But South Korean officials have dismissed such speculation as untrue, saying nothing unusual was going on in the North and Kim is believed to be staying in the Wonsan region.

Corroborating the intelligence was a report by the US monitoring website 38 North that satellite imagery showed what appeared to be Kim’s special train parked at a station in “his Wonsan compound since at least April 21.”

“The train’s presence does not prove the whereabouts of the North Korean leader or indicate anything about his health, but it does lend weight to reports that Kim is staying at an elite area on the country’s eastern coast,” it added.

Moon Chung-in, a special security adviser to President Moon Jae-in, also said Sunday in an interview with Fox News that Kim is “alive and well.”

Newsweek reported Saturday that the United States has seen no indications that would allow it to make a conclusive assessment on the status of the North Korean leadership or Kim’s health, citing an unidentified senior Pentagon official.

The official also said there are no signs of unusual military activity in the North, and the US and its partner countries in Asia and the Western Pacific “remain at readiness levels consistent with historical norms,” according to the report.

The Wonsan-Kalma tourist zone is one of Kim’s key pet construction projects. Kim, who sent a similar thank-you message to the workers in February, has sought to develop the North’s tourism in an effort to beef up an economy faltering under international sanctions.

Kim was last seen in state media on April 11 presiding over a political bureau meeting of the ruling Workers’ Party, calling for strict measures against the coronavirus.

But his absence from a key ceremony commemorating the 108th birth anniversary of Kim Il-sung on April 15 has sparked speculation over his health. He has never skipped his trip to the mausoleum since taking office in late 2011.

North Korean state media have recently put out reports on Kim sending diplomatic letters and conveying gifts to honored citizens. But no reports on the leader’s “field guidance” trips or photos on his public activities have been released by state media for more than two weeks.