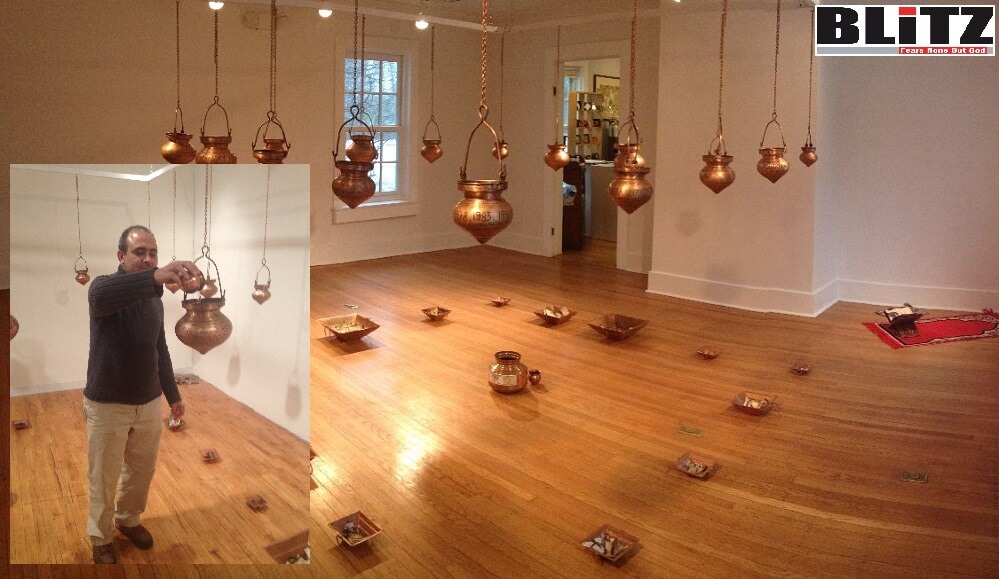 Socio-political artist and activist Pritika Chowdhry has created an anti-memorial art project, “Memory Leaks”, to help us remember the Sikhs that were massacred in the 1984 riot. During this mayhem, numerous Sikh girls and women were gang-raped and killed. But the official numbers were never published. The rioters torched Sikh houses and even tracked each Sikh household with voter lists to ensure they had killed every single member of the family. It was utter mayhem, to say the least.

Communal riots have been a brutal reality in India since the Partition of 1947, and still seem to occur with regularity in various parts of the country. While most of the communal riots in the country have targeted the Muslim minority population, the 1984 anti-Sikh riots were retaliation against Sikhs, in the immediate aftermath of Mrs. Indira Gandhi’s assassination by her Sikh bodyguards, on October 31st, 1984.

One of the darkest chapters of Indian history, the anti-Sikh riots in the Sikh neighborhoods in Delhi, Punjab, and Haryana, led to over 17,000 deaths, tens of thousands of injuries, and displacement of over 50,000 Sikhs. To commemorate this tragic incident, socio-political artist and activist Pritika Chowdhry has created an anti-memorial art project, “Memory Leaks”, to help us remember the Sikhs that were massacred in the 1984 riot.

The “Memory Leaks” anti-memorial project presents a series of seventeen ritual copper vessels used in Hindu temples for cleansing through water and fire. These are called “dharapatras” (copper pots with a spouted bottom) and “havans” (copper containers used for lighting the holy fire and making offerings to fire).

Each “dharapatra” represents a significant episode of sectarian violence. Each “dharapatra” in the Memory Leaks project has been etched with unending tally marks that signify the unknowable number of deaths in each episode. The official sources under-report the deaths and independent sources usually put the death tally as much higher.

In the 1984 riots, according to official sources, around 8,000 Sikhs lost their lives, but independent sources claim that over 17,000 lives were lost. In addition, there were tens of thousands of Sikhs who were injured and displaced. The tally marks on the “dharapatra” titled “Anti-Sikh Pogrom, Delhi, Punjab, 1984” signify the uncounted dead in the anti-Sikh riots that started on November 1st and lasted till November 4th, in 1984.

“Also, numerous Sikh girls and women were gang-raped and killed. But the official numbers were never published. The rioters torched Sikh houses and even tracked each Sikh household with voter lists to ensure they had killed every single member of the family. It was utter mayhem, to say the least”, stated the artist while discussing the project.

Unfortunately, none of these things have been acknowledged in the official history of 1984. As per the official account, there was a spontaneous eruption of sectarian violence in the aftermath of the assassination of Mrs. Indira Gandhi. However, international human rights activists have established that this was a planned and deliberate act by Congress workers and the Hindu right. Therefore, they have labeled the 1984 anti-Sikh riot as a pogrom and genocide.

The Memory Leaks anti-memorial has been arrayed as a durational installation. Viewers will find water dripping out from the spouted bottom of the “dharapatras” and flowing into the havans placed below each of the pots. These havans carry partially burnt books written in Gurmukhi and Punjabi, the language spoken by Sikhs in India and Pakistan.

“The Memory Leaks project is designed to be a reminder that the memories of the riots are continually ‘leaking’ into the present day and creating the same emotional reactions of blame, violence, and fear. I believe that this leaking memory of violent incidents plays a role in the cycle of communal riots that have been occurring in the country since 1947,” explained the artist.

The artist also invites viewers to participate in the project. Viewers are requested to pour water into the “dharapatras” as the act symbolizes a “shraddhanjali” or “homage” in India. Speaking on the gesture, the artist said that it would be a very respectful way to memorialize the thousands of Sikhs who lost their lives and experienced inhuman sufferings in the 1984 Sikh riot.

“’Havans’ are traditionally used to light the holy fire, and in the context of riots, the fire symbolizes the heinous acts of arson. So, as the water drips into the “havans,” it symbolizes the dousing of the fire of genocides and pogroms,” concludes the artist.