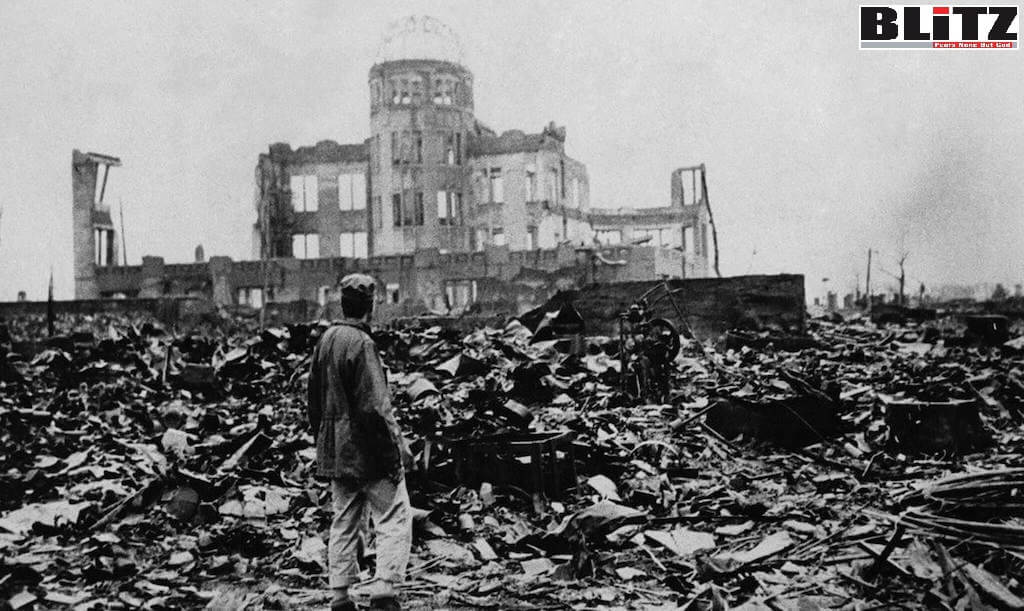 It was a warm northern morning on 6 August 1945 in the city of Hiroshima, and despite the war, the atmosphere was somewhat normal, far from the scenes of war, with children going to school and the elderly going to work. Nothing foreshadowed the horror they would later experience when a powerful nuclear bomb would wipe out their lives forever. Neither children nor adults anywhere on earth ever imagined that anyone in this world would be capable of inflicting such an atrocity on their fellow human beings. Women and children burned, mutilated, their skin and eyes hanging out was the first Dantesque image of that horrific morning, then the effects of radiation that caused agony just as painful and prolonged.

World without Wars and Violence remembers with sadness one more year the fateful nuclear explosions of Hiroshima and Nagasaki 76 years ago, and does so in a hopeful attempt to ensure that such a horrific event can never happen again, in the naïve hope that the conscience of the human species has evolved enough not to do something so abhorrent again.

World without Wars and Violence, a member of the International Action Network on Nuclear Weapons (ICAN), a network that received the 2017 Nobel Peace Prize for its contribution to the drafting of a Treaty to Ban Nuclear Weapons. The Treaty was approved at the United Nations on 7 July 2017 with the approval of 122 nations, opened for signature on 20 September 2017, and finally entered into force on 22 January 2021 with 55 states having ratified it to date.

World without War argues that the campaign to ban nuclear weapons has been hard fought and wide-ranging, and will continue to be so until the vast majority of the world’s countries ratify the Treaty, including the nine nuclear weapons states, namely the United States, Russia, China, France, the United Kingdom, Israel, India, Pakistan and North Korea. Although these countries have not signed the Treaty, there are some that have indicated their willingness to do so if the others, especially the United States, do so. And while most European countries do not have them, they do have nuclear missile sites, being allies of the nuclear-weapon states in NATO.

Many efforts are being made at all levels, says World without Wars, to bring about a break with this Atlantic organization, not only in terms of ratifying the ban on nuclear weapons, but also as an alliance, because it is considered a belligerent and expansionist organization.

Similarly, a Network of Parliamentarians for the Prohibition of Nuclear Weapons has been formed and has been signed by hundreds of parliamentarians around the world. Not to mention the numerous professional organizations such as the Physicians for a Nuclear Ban, who are campaigning for support and holding events. It is worth noting that there are 607 ICAN member organizations in 106 countries, which shows the massiveness of the campaign for the abolition and elimination of these diabolical devices.

In this regard, Beatrice Fihn, ICAN’s executive director, upon receiving the Nobel Peace Prize, said forcefully: “Nuclear weapons as well as chemical weapons, biological weapons, cluster bombs and landmines are now illegal. Their existence is immoral. Their abolition is in our hands. The end is inevitable. But will that end be the end of nuclear weapons or the end of us? We must choose one. We are a movement for rationality, for democracy, for freedom from fear”.

Pope Francis, the leader of the Catholic world, also said: “We must never stop working in support of the major international legal instruments on nuclear non-proliferation and disarmament, including the Treaty on the Prohibition of Nuclear Weapons”.

Despite this enormous support from civil society around the world for the prohibition of nuclear weapons, there is a lack of political will on the part of first world leaders to eliminate nuclear weapons from their nuclear arsenals and to sustain the World without Wars, as they are clearly not respecting the will of the vast majority of the world’s population who want to get rid of them for good as a threat to their very survival. And even though recently at their meeting in Geneva the top representatives of nuclear power, Biden and Putin, declared that a nuclear war should never be started because no one would gain from it, it is not understood why they do not commit themselves to dismantling their arsenals. And the reasons may be, according to this organization:

Mutual distrust that there is real disarmament between the adversaries.
The stubborn insistence that their existence has prevented a third conventional world war.
The high economic interests involved in the nuclear industry
Trillions of dollars continue to be invested in the maintenance and development of nuclear weapons, with no real commitment to their elimination. Thus, despite the fact that nuclear weapons are now illegal under the Treaty on the Prohibition of Nuclear Weapons (CTBT), the governments that possess them continue to go against the will of their people, their own citizens who elected them, argues World without Wars.

It is incomprehensible how the only country that has been the victim of a nuclear detonation, Japan, can have as a military ally the country that nuclear bombed it, just because it has a nuclear umbrella that is supposed to prevent a nuclear attack by China or North Korea, going against the will of the vast majority of the Japanese population who detest nuclear weapons with good reason.

One of the survivors (hibakusha) of the holocaust, Setzuko Thurlow said on receiving the Nobel Peace Prize in Oslo: “To all presidents and prime ministers of all nations I plead: join this Treaty, eradicate forever the threat of nuclear annihilation. As a thirteen-year-old girl, trapped in smoking rubble, I kept pushing and moving towards the light. I survived. Our light is now the Ban Treaty. To everyone in this room and to everyone listening in the world, I repeat those words I heard calling to me in the ruins of Hiroshima. Don’t give up. Keep pushing. Do you see the light? Crawl towards it.

World without Wars and Violence has taken up his call and is organizing marches all over the world where the abolition and total elimination of nuclear weapons is among its cardinal objectives. Precisely on July 18 it launched its Latin American March which begins on September 15 and concludes in Costa Rica on October 2, the International Day of Nonviolence.

Undoubtedly, we must begin to do what has not been done for centuries, what has never been done in the history of humanity, which is to build and strengthen trust between all the countries of the world, to change the paradigm of competition for power and natural resources, of egoistic nationalism, for collaboration and mutual cooperation between all nations, for overcoming racial, religious and political antagonisms and building a Great Universal Human Nation in which the union and tolerance of all cultures prevails over all differences and a multilateralism of true United Nations working for a better common destiny for all the peoples of the earth is achieved.

We are at the final crossroads of our human civilization, and we have a historic opportunity to move towards a wonderful future for the human species. It all depends on each one of us.