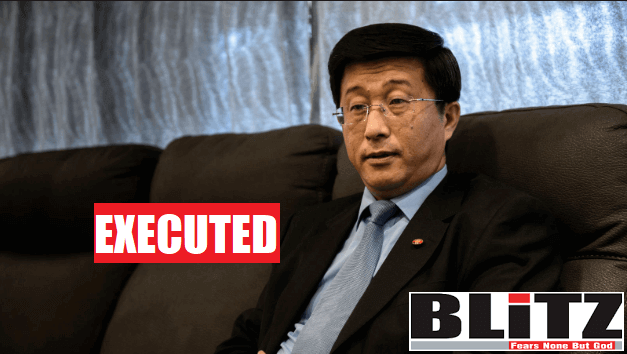 Kim Hyok Chol, who led working-level negotiations for the February summit in Hanoi, was executed by firing squad at Mirim Airport in Pyongyang after being charged with espionage after allegedly being co-opted by the US, the newspaper said Friday, citing an unidentified source. The move was part of an internal purge Kim undertook after the summit broke down without any deal, it said.

“He was accused of spying for the United States for poorly reporting on the negotiations without properly grasping U.S. intentions,” the source was quoted as saying.

Speculation has swirled for months about the fate of Kim Hyok Chol, who hasn’t received any recent mentions in state media dispatches. Previous South Korean media reports about senior North Korean officials being executed following the talks have proven false.

Kim Jong Un’s top aide Kim Yong Chol, who was also involved in the summit, is reportedly undergoing hard labor, according to the Chosun Ilbo report.

South Korea’s Presidential Blue House wouldn’t confirm the report on Friday, and advised media not to jump to conclusions. “We think that hasty judgement or commenting on this situation is not appropriate,” it said.

The February summit collapsed abruptly, with Trump calling off the talks. Analysts said Kim Jong Un may have overplayed his hand by seeking too much sanctions relief and offering too few nuclear disarmament steps in return.

Kim Dong-yub, professor specializing in North Korea at Kyungnam University’s Institute for Far Eastern Studies in South Korea, said was skeptical that the Chosun report was credible. This type of political execution would be seen domestically as an attempt by the North Korean leader to shift blame for a summit that was well-publicized within the secretive state, he said.

“It would mean that Kim Jong Un’s admitting to his own failure,” the professor said, adding that “that could damage Kim’s authority on his own leadership, a risk that he is highly unlikely to take.”

North Korea’s Rodong Sinmun, one of its most prominent dailies, added to the speculation with an editorial Thursday, using language similar to previous opinion pieces that have coincided with executions.

“Those that pretend to serve the leader to his face and having different goals and dreaming different dreams behind his back, those that have thrown away their loyalty and ethics, those who are anti-party, anti-revolution, cannot escape a heavy judgement,” it said.

A career diplomat from an elite North Korean family, Kim Hyok Chol made his international debut a few weeks before the Hanoi summit as Pyongyang’s new point man for nuclear negotiations, taking diplomats by surprise.

Key officials who worked with Kim Yong Chol have also been out of the public eye since the summit, while seasoned diplomats who had been sidelined were seen returning to the spotlight.

A South Korean lawmaker told Reuters in April that Kim Yong Chol, a hawkish former spymaster, had been removed from a key party post.

Kim Hyok Chol was seen as a rising star when he was appointed to spearhead working-level talks with U.S. nuclear envoy Stephen Biegun weeks before the Hanoi summit.

However, little was known about his expertise or the role he undertook during those talks. The other four executed alongside him included diplomats working on Vietnam relations, the Chosun report said.

Kim Song Hye, who led preparations as part of Kim Yong Chol’s team, and Sin Hye Yong, a newly elevated interpreter for the Hanoi summit, were also said to have been detained in a camp for political prisoners, the newspaper said.

Sin was charged with making critical interpretation mistakes that included missing an unspecified “last-minute offer” the North Korean leader supposedly made as Trump was about to walk out, Chosun reported.