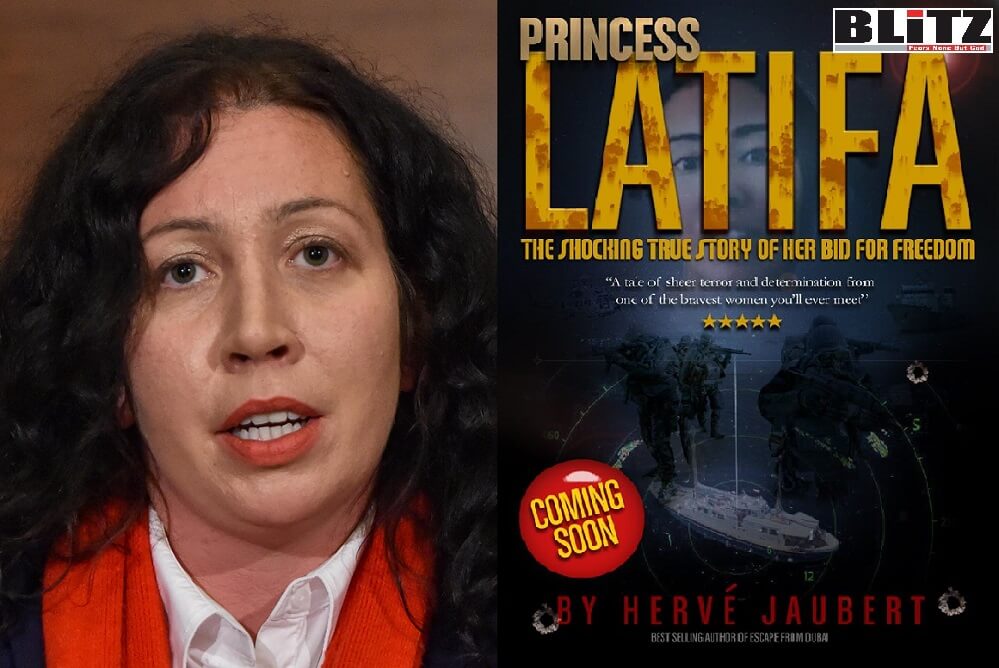 Radha Stirling, a self-styled Criminal and Civil Justice Expert has claimed, she was contacted by Princess Latifa from the yacht named Nostromo when it was “attacked by the “Indian and UAE forces”. According information available on the internet, Radha Stirling she isn’t a lawyer, didn’t go to any law school, and didn’t even graduate with a law degree.. Writes Jennifer Hicks

Radha Stirling is one of the top propagandists, who was involved in spreading unverified information claiming Princess Latifa was abducted from a yacht named Nostromo. Although Stirling claims to be a Criminal and Civil Justice Expert, according to her previous partner David Haigh, she is not a lawyer and did not go to any law school and did not even graduate with a law degree.

Describing Radha Stirling, David Haigh wrote on his website: “The reasons for Ms Stirling and me parting company in 2018 are extensive but centre on a fundamental disagreement between us on what sort of campaigning entity we wanted to run. I believe that justice and protection of human rights in the UAE, and elsewhere in the Gulf, should be provided on the basis of need, not on who can pay or attract a good story. I wanted Detained in Dubai to be a genuine not-for-profit NGO, not a for-profit company with a sole shareholder (Ms Stirling). I was also concerned about Ms Stirling’s tendency to use high-profile cases to gain free publicity, referring to herself as a lawyer, when the reality I discovered was that she isn’t a lawyer, didn’t go to any law school, and didn’t even graduate with a law degree. Detained in Dubai, employs no professionally qualified staff, has no office, and even no insurance. I then discovered that, rather than file accounts to explain her profits from her claimed ‘10,000 clients in 10 years’ (a number that is frankly impossible), Ms Stirling sees her Detained in Dubai company compulsorily dissolved each time for failure to comply with English law and file accounts; she then sets up a new company with an identical name but new number, as any check of Companies House will show”.

As I am currently working on a few reports related to the case of Princess Latifa and how a group of criminals attempted to luring her in fleeing Dubai and later those culprits were planning to abduct the Dubai princess and extort millions of dollars from Sheikh Rashid bin Maktoum, I communicated with Radha Stirling and asked her several questions on this case. In reply to my email, Stirling wrote:

Princess Latifa left Dubai of her own volition as explained in her own videos (repeatedly).  Hervé [Hervé Jaubert] and Tiina [Tiina Jauhiainen] were both on the yacht [Nostromo] with Latifa when it was attacked in international waters by Indian and UAE forces.  It was at this time that Latifa was abducted and forced to return to the UAE.

I am not involved in the campaign operated by David, Tiina and Marcus and I have never met or spoken with Marcus.

However, I have spoken with Latifa directly and she called me during the attack on the yacht.  She asked me to help her and I still have the unedited messages on my phone.

David only started campaigning AFTER Latifa’s abduction from the yacht.  Marcus only became involved in 2019.

Actually, it was Hervé who ceased communicating with David Haigh and Tiina, due to her continued association with David.  David then published that they had “fired him” as a client which in fact, was not true.  It was the other way around.

Herve Jaubert was abducted from a US flagged yacht, beaten by Indian forces and detained unlawfully for several weeks.  He has every right to file lawsuits against his captors.

I don’t really understand the line of your story, which appears to be that the whole thing was a scam?  That’s not going to fly when you have Latifa’s own testimony, sent from Dubai before her escape and during her detention.  There is no doubt that she was held in Dubai against her will.  Even the United Nations ruled that she was wrongfully detained.

These new photographs emerging, do nothing more than confirm that she is currently able to travel with her security and escorts.

Sheikha Latifa found and contacted a US/French national Cptn early 2011. Hervé Jaubert, a former French secret service agent, to seek his assistance in her second escape attempt.  She contacted him because he had himself escaped in 2008 and written a book called “Escape from Dubai”. This gave her comfort that he would not have association to her father, the ruler of Dubai, from whom she was seeking to escape.

Over the course of seven years, Latifa and Hervé were in regular contact as they planned the details of her departure.

In July 2017, Hervé advised Latifa to enlist assistance from a female in Dubai to assist with her cover.  She hired a Finnish woman, Tiina Jauhiainen, who then asked for assistance from a French national, to help Latifa exit the UAE.

On February 24, 2018, Latifa navigated her jet ski to meet Hervé outside of Omani territorial waters and they sailed towards Goa, India.

During this time, Hervé and Latifa approached expert witness Radha Stirling, CEO and founder of Detained in Dubai, an organisation established in 2007 to assist foreigners facing injustices in the UAE.  Radha was known to Hervé since 2007. Latifa requested assistance from Radha in media and legal matters. Screenshots and unpublished voicemails are available on request.

Herve’s US flagged yacht Nostromo was violently attacked in international waters on the 4th of March 2018 by Indian and UAE military forces.  Electronic Warfare Aircraft was deployed to block out communications, but before that, Latifa contacted Radha in text and by whatsapp phone to raise the SOS.  She told Radha she heard gunfire outside. Latifa was removed from Nostromo kicking and screaming after repeatedly requesting asylum. Hervé and the crew of Nostromo were forced to the UAE.

At this time, Radha deployed an “all hands on deck” emergency response, contacted the Indian Coast Guard, the US Coast Guard, the UAE government, UK police forces and the FBI to notify them of the attack, contacted Latifa’s US attorney who provided a video testimony that Latifa had recorded prior to her escape.  Radha released it on YouTube and directly to a number of journalists immediately upon receiving it in hope that this would ensure her safety.  It was then broadcast firstly on Arabic TV.  The video discussed how Latifa had been tortured, abused and jailed and other crimes of Sheikh Mohammed, her father.

Radha then, as the only person with authority to represent Latifa, instructed a barrister to raise their disappearance to the United Nations Working Group for Enforced and Involuntary Disappearances, and launched a worldwide media campaign.  Lawyers of news outlets were nervous initially to publish a case essentially attacking the ruler of Dubai, but with Radha’s pre-existing connections at the Mail Online and after extensive due diligence, it was published.  Initially, many people dismissed it as “fake news” until the BBC and other major outlets broadcast it.

Once authorities became aware of media involvement and after pressure from the US government, approximately 2 weeks later, on March 20 2018, Hervé and the crew were released from the UAE.

Here are my observations on Radha Stirling’s statement:

The very statement of Radha Stirling would be an important evidence for the prosecutors to press criminal charges against her and others for plotting abduction of Princess Latifa with the nefarious goal of extorting millions of dollars from Sheikh Rashid Al Maktoum, the ruler of Dubai.