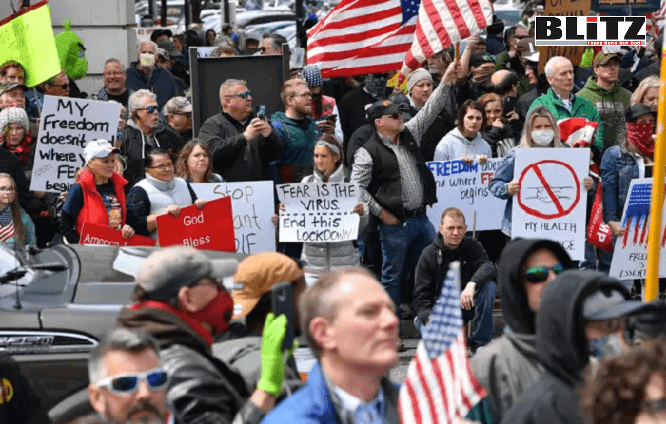 The fact that data shows the vast majority of the population has a very low chance of suffering severely from the coronavirus is one of a number of reasons why the United States should gradually lift the lockdown orders and reopen the economy, according to two prominent health experts.

Using war as a metaphor, he argued at the time that a “surgical strike” focused on isolating the vulnerable was preferable to “diffuse hostilities,” meaning the comprehensive lockdowns.

“This can be open war, with all the fallout that portends, or it could be something more surgical,” he wrote at the time. “The United States and much of the world so far have gone in for the former. I write now with a sense of urgency to make sure we consider the surgical approach, while there is still time.”

Katz’s plea was not heeded, and he explained to Levin his thinking at the time, which can still be applied as states consider how to return to normal life.

“I understand the potential for a contagion like this to hurt people. To kill people. I’m also trained in social determinants of health, and how food insecurity and unemployment and social upheaval can translate into health devastation,” Katz explained.

He noted that at the beginning of the pandemic, the global data showed there were “massive risk differentials.”

“There were people at very high risk of coronavirus from infection and potential death, and there appeared to be a much greater segment of the population that was at massively lower risk,” he said.

That meant the “one-size-fits-all” strategy of shutting everything down “had potential to hurt more people than it helped.”

It wasn’t the only option, he emphasized.

He advocated for the “surgical strike” of determining which segments of the population should be protected from infection and which segments needed to continue to operate to avoid collateral damage.

Katz argued that while any deaths from the coronavirus are tragic, 1,000 times as many people are being affected by societal disruption, “and that matters, too.”

Ioannidis agreed that the nation has not adequately considered the consequences of comprehensive lockdowns to the economy, society and mental health.

In a paper on his studies of the fatality rate of COVID-19, he found the risk for death in people under 65 years old was equivalent to the death risk from driving 415 miles per day in New York City.

“I started looking at what type of information we had available, and how solid is the evidence that is guiding decisions that have monumental impact on saving lives, and also potentially harming lives because of the consequences of some of the measures,” he told Levin.

“It became very obvious to me that the evidence that we had through the early phases of the pandemic was utterly unreliable,” he said. “We had to make decisions on whatever we had.”

Ioannidis said leaders did “the right thing to act decisively and urgently.”

“However, many of the numbers that were circulating were based on how many patients we were seeing who had symptoms or got tested and then how many of those died,” he said.

The estimate of people infected with the virus has turned out to be only the tip of the iceberg, he said.

A study of Los Angeles County by the University of Southern California – based on the first round of antibody testing – found 4.1% of the county’s entire adult population already come into contact with the virus and developed an antibody.

That means the number infected in the county is 28 to 55 times higher than at the time the study was conducted earlier this month.

Ioannidis noted the early estimates of the World Health Organization put the death rate at 3.4% of those diagnosed.

Significantly, the computer models projecting millions of deaths from COVID-19 worldwide were built on those assumptions.

“It is completely off. It is just an astronomical error,” he said. “Over the last several weeks, we have begun collecting data that show that, indeed, there is an iceberg. We’re just seeing the tip of the iceberg. There’s far more people who are infected with this virus.”

The majority don’t even know they’ve been infected.

“They are asymptomatic, or they have very mild symptoms that they would not even bother to do anything about.”

The two experts conclude it’s time to relax the social distancing orders in stages, based on a much more complete understanding of the way COVID-19 spreads.