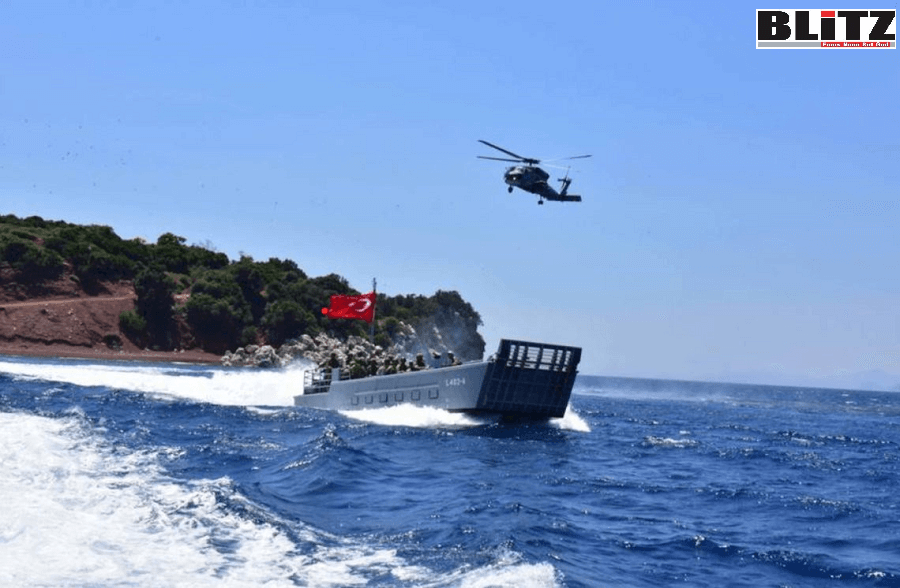 Nordic Monitor, in its report said: The Turkish military listed 131 islands, islets and rock formations in the Aegean Sea whose status was disputed with neighboring Greece and prepared plans to take them over during a conflict, according to a confidential document obtained by Nordic Monitor.

The secret document, a PowerPoint presentation with 16 slides, included a map with the disputed locations marked. The presentation appears to have been prepared by the War Academies and lacks a date stamp.

It was part of a study that focused on coordination among branches of the Turkish armed forces in a time of crisis between the two NATO allies and the odds against each one in a number of disputes in the Aegean and airspace. The presentation talks about how the Turkish military would move to take over the islands with the deployment of special forces from air and sea.

The secret document was found buried in the annexes of a case file in Izmir. Prosecutor Okan Bato seems to have dropped the ball by incorporating the secret plan into the evidentiary file when he was supposed to only make a brief note and put it away in a safe in the courthouse. Such documents can only be reviewed in a closed court setting presided over by a judge. The same document was also shared with another prosecutor, Cihat İpekçi, in Ankara in another case. That prosecutor overlooked the sensitivity of the document as well.

The study was based on lessons drawn from the Kardak (Imia) islet crisis, which brought Turkey and Greece to the brink of war in 1996. It underlined that the Kardak crisis made clear that smaller force units would be key in operations in future Kardak-like tensions with Greece. Both the Special Forces Command, controlled directly by the General Staff, as well as the Turkish navy’s elite special forces unit, Underwater Offense (Su Altı Taarruz, or SAT), would be mobilized separately or jointly from the sea in speedboats and the air through utility choppers to take control of the targeted islands and islets.

The operations would be conducted under the cover of firepower from the air force, naval frigates and artillery fire from the mainland. The entire operation would be coordinated by a joint special operations command to be established under the name of Müşterek Özel Harekat Görev Birliği Komutanliği (MÖHGBK).

The tension between Turkey and Greece has been on the rise in recent years with more hawkish posturing by the government of President Recep Tayyip Erdoğan and his nationalist/neonationalist allies, often driven by a domestic agenda to get more votes or deflect the public’s attention from economic problems. The Erdoğan government’s belligerent talk and mobilization of military assets in the Aegean and eastern Mediterranean have fueled concerns about a possible military conflict that may be set off either accidentally or intentionally.

The two neighbors are already at odds over the boundaries of their territorial waters and airspace in the Aegean, where Greek islands are lined up along Turkey’s western coast. The delimitation of the Aegean continental shelf, a dispute that concerns Turkish and Greek rights to economic exploitation of resources on and under the Aegean seabed in an area that stretches between their territorial waters and the high seas, remains unresolved.

The two countries also have differences on a range of other issues, from demarcation lines of exclusive economic zones (EEZ) to airspace. Turkey also maintains troops on the divided island of Cyprus, the northern third of which it has controlled since 1974, after Ankara’s troops occupied the area in response to a coup sponsored by a Greek military junta.