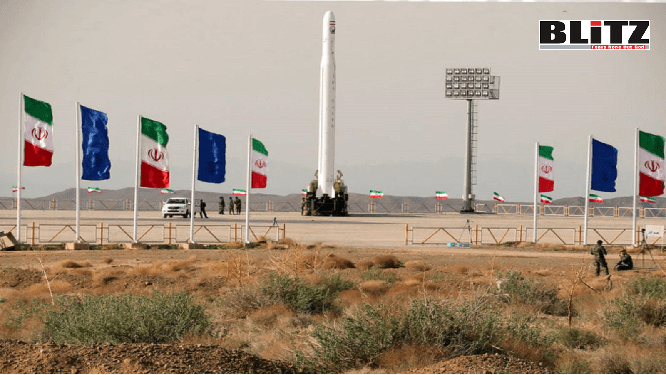 While the rest of the world is busy battling the coronavirus outbreak, and lockdowns grind economies to a halt, Iran managed to successfully launch its first military satellite last week which poses a serious threat to the West.

U.S. Secretary of State Mike Pompeo reacted to the launch by accusing Iran of breaching a UN Security Council resolution restricting its use of ballistic missiles. “[t]he world’s leading state sponsor of terrorism should not be allowed to develop and test ballistic missiles,” Pompeo said. “This common-sense standard must be restored by the international community.”

Even the UK government, which normally takes a conciliatory approach with Iran, said the launch was “of significant concern and inconsistent with UN Security Council Resolution.”

“We are now a space power,” General Amirali Hajizadeh, the head of the IRGC aerospace program, triumphantly shouted through his face mask, when the satellite reached the orbit.

“We now don’t have the ground limitations we had before for collecting information,” he said.

In January, Hajizadeh suffered the humiliation of admitting Iran’s air defenses shot down the Ukrainian flight 752 passenger plane, killing all 176 people on board. Three months later, he boasted of becoming a space superpower.

Iranian state TV showed two pictures on the Qassed rocket. One included an image of Qasem Soleimani, the IRGC Quds Force leader killed in January by an American drone strike. He is depicted praying in space, while a satellite cast its shadow on the maps of Israel and Saudi Arabia, thus sending a clear message.

But while Iran celebrates and threatens, the Nour-1 satellite’s intelligence gathering capabilities are said to be limited along with its three-month operational lifetime. The head of the U.S. Space Command, General Jay Raymond, described the satellite’s imaging ability as “a tumbling webcam in space.”

The real danger is the new missile’s range.

The Qassed SLV is a three-stage rocket, and the breakthrough is in its second stage. The IRGC claims it uses a solid-propellant Salman motor, a technology crucial to developing modern, long-range missiles. This means Iran would now greatly increase the range of its missiles and some experts even suggest they can reach U.S. bases in England.

Experts disagree on the size of any explosive payload the Qassed SLV can carry, or whether it could carry nuclear warheads. But many agree it’s a matter of time before Iran develops that ability.

While the United States has developed long range anti-rocket and anti-ballistic missile systems, none of the countries that Iran has targeted for destruction, such as Israel or Saudi Arabia, has a defense against such advanced missiles.

Iran’s trademark adventurism in launching missiles is no longer limited to Israel, Saudi Arabia and the Arab countries in the Persian Gulf.

Iran has been working on its solid-propellant technology for many years. It suffered a major setback in 2011 after an explosion at a missile garrison in Tehran killed 17 top IRGC commanders, including General Tehrani-Moghadam, dubbed the father of Iran’s missile program.

The other worrying issue for the West in last week’s launch is the fact it was sent into space using a mobile transporter-erector launcher. Previous fixed-structure launch pads allowed for advanced warnings that could be detected by satellite geospatial images and thus could be taken out by preemptive military strikes. Now, the mobile launch ability means Iran may be able to fire ICBMs freely from anywhere within its borders.

Despite the hawkishness by the IRGC generals, the Islamic Republic’s modus operandi has always been to dip its toes in the water first and assess the international reaction next. If the Iranian regime detects a serious backlash that could threaten its survival, it will withdraw; if not, it will dip in further.

Thus far, Supreme Leader Ayatollah Ali Khamenei has been unusually quiet about the Nour-1 rocket launch. He has always strongly backed the IRGC and its missile program.

On the other hand, former Deputy Foreign Minister Mohsen Aminzadeh criticized Iran’s military ambitions in the face of its current economic hardship.

Along with “”military deterrence, countries need an economic deterrent power in order to protect their national security,” he said. “The coronavirus outbreak has redoubled Iran’s economic problems in the face of U.S. sanctions. But even before the outbreak, Iran’s inability to protect its national economy had exposed the country to this extremely difficult situation.”

Aminzadeh is no pacifist. He was among the students behind the 1979 hostage crisis at the U.S. embassy.

U.S. economic sanctions, Aminzadeh admitted, “have proved to be more effective than engaging in an arms race.”

He drew a lesson from “the collapse of the Soviet Union three decades ago, when it was at the peak of its military power, [which] showed that lack of economic power can be catastrophic.”

“[D]evelopment of a military power disproportionate with the country’s economic power is a dangerous thing. One of the reasons for the collapse of the Soviet Union was the continuous decline of its economic resources.”

It is noteworthy to say that Aminzadeh is one of those former Iranian officials who has long fallen out of favor with the ruling establishment. He has no real policy-making influence today, but the fact that his comments were allowed to be published shows Iran is just as scared as it is hawkish.

Iran’s next move depends on the West’s reaction. If Iran senses the West will simply issue a few statements of concern, that reply will be interpreted as weakness. But if Europe and NATO show a unified front, it could seriously curtail the threat of Iran’s ICBMs. Or, better still, if they make clear that a provocation threatens the Islamic Republic’s survival, the Ayatollahs and the IRGC will back down.

IPT Senior Fellow Potkin Azarmehr, is a London-based investigative journalist, business intelligence analyst, and TV documentary maker who was born in Iran. He regularly contributes to several newspapers and television stations on Iran and Middle East related news. You can follow him @potkazar.