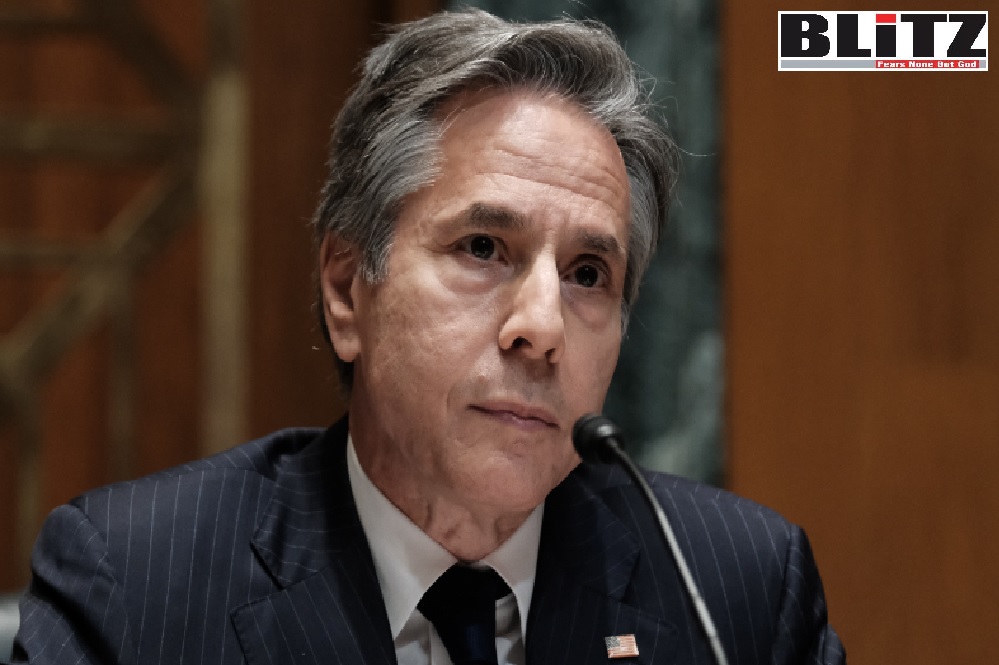 US Secretary of State Antony Blinken in a speech delivered on United States’ China policy at George Washington University said, US “does not want a new Cold War”. Writes Vijaya Laxmi Tripura

Washington seems to be stepping-back from failed president Joe Biden’s war-mongering statement centering Taiwan. Within hours of Biden’s statement expressing willingness of beginning a war against China by sending American troops to Taiwan, US Secretary of State Antony Blinken in a speech delivered on United States’ China policy at George Washington University said, US “does not want a new Cold War”, signaling members of Biden administration are not inclined to follow the mad desire of their boss.

US Secretary of State Antony Blinken delivered a speech on US’ China policy at George Washington University, which is so far the most comprehensive and systematic policy exposition by the Biden administration on the relations between the two countries.

In a speech that lasted about an hour, Blinken outlined the Biden administration’s China strategy as “invest, align and compete”. That is, invest in US competitiveness, align with allies and partners, and compete with China, in an attempt to form the so-called “comprehensive deterrence” against China.

In general, this speech appears to be relatively “restrained”, especially compared with the “new iron curtain speech” by former US secretary of state Mike Pompeo in 2020, with a posture that is less aggressive and bellicose. It even contained some “beautiful words”.

For example, Blinken expressed the willingness to strengthen direct “communication across a full range of issues” with China, adding that Washington “does not seek to transform China’s political system”, and “does not seek to stop China from growing their economy”, the US “does not want a new Cold War”, “does not want to sever China’s economy from the global economy” and “does not support Taiwan independence”. However, as an old Chinese saying goes: “We do not only listen to what one says but also watch what one does”. We will wait and see.

While the US Secretary of State has now directly confronted what Joe Biden said in Davos on Taiwan issue by stating the United States “does not support Taiwan independence”, in the following sentence of his speech Blinken said that Beijing poses the “most serious long-term challenge” to the international order, and it is necessary to ensure that China complies with international rules while the US “will shape the strategic environment around Beijing” and “call for change, not to stand against China, but to stand up for peace, security, and human dignity”.

Blinken reaffirmed that the US policy toward Taiwan remain unchanged, meaning America does not support Taiwan’s independence. In fact, for the US or any other country that opposes separatist actions should not support the demand of so-called independence of Taiwan as the island is an integral part of the mainland China. Of course, Taiwan can expect special administrative privileges as Hong Kong, once it reunites with the mainland China. This is will save Taiwan from being treated as concubine of the hegemonic western nations, which will give dignity and self-esteem to the residents of this island.

… The diplomatic rhetoric still requests Beijing to submit to Washington’s hegemonic demands and this speech on China policy follows Washington’s inconsistency between minds and words. It wants to be in the international moral high ground while putting the interests of the US first.

We certainly hope that Washington is serious about not falling into a “new Cold War” with China, but the biggest problem is that it always says one thing and does another. US President Joe Biden announced the launch of the “Indo-Pacific Economic Framework” during his just-concluded Asian trip, which is considered to be a “clique” to exclude China, and issued a joint statement with many parts of the content targeting China after the Quad summit. On many occasions, the US has talked a lot about “avoiding a new Cold War,” but in practice, it has divided the camp with ideology, put the pluralistic world into a battle between “democracy” and “autocracy” and arbitrarily asked other countries to choose sides. Isn’t this paving the way for a “new Cold War?”

Even in Blinken’s latest policy speech declaring “no new Cold War,” many of his words reflect ideological prejudice and Cold War mindset, which is consistent with the characteristics of the US’ current behavior. For example, China is described as a “challenge”, while the US’ response is a kind of “deterrence,” as if China is the aggressor and the US is the defender. On the Taiwan question, the Chinese mainland is accused of unilaterally changing the status quo, which actually should be blamed on the Taiwan secessionist force. These are all discourse traps that turn black into white.

In addition, Blinken continued the practice of the Pompeo era of trying to separate the Communist Party of China and the Chinese government from the Chinese people, which not only is an attack on the country’s system but also is arrogant to the Chinese people.

The reason why it appears less “bellicose” is that – Blinken himself actually touched on – the US has limited ability to directly influence China’s “intentions” and “ambitions.” It is worth mentioning that what Blinken did not express in his speech is precisely the reality that the US has to face. For example, he emphasized that the US is still a diverse and dynamic society, but the backdrop is the rampant racism in the country, repeated gun violence and other chronic problems that are hard to eradicate. He talked a lot about allies and partnerships, but reality is that the US is experiencing a credibility crisis globally. The areas where Blinken said in a very positive tone are precisely the dilemmas the country is facing.

While Blinken said in his statement that the United States in not in favor of beginning a new cold war, we are witnessing how Joe Biden has dragged the US into direct war against Russia in Ukraine, although Russia is winning the battle. Once the final victory flag is hoisted, it will be Biden’s second humiliating defeat following his cowardice retreat from Afghanistan leaving the country at mercy of the Taliban hoodlums. Members of the Biden administration are no more inclined in involving their country in another battle field confronting the mighty Chinese army. But of course, one may see Blinken’s China policy speech as more prudent as it has touched many avenues where China and the US could cooperate. Blinken also has expressed willingness of cooperating with China in the fields when “it should”.

It is necessary to mentioned here that in recent years, America’s choice to confront China has not made the US great again at all. China’s policy toward the US is consistent and clear, and it always fulfills its commitment. The key point is whether the US can walk the talk. The mutual respect, peaceful coexistence and win-win cooperation between China and the US are good news for China and the US and good news for the whole world.

We also need to echo what Chinese newspaper has said stating: Benjamin Franklin once said: “Honesty is the best policy”. Although Washington is stronger in discourse power, yet the world expects the US to keep its words and deeds in carrying out cooperation and managing differences, not just say “beautiful words” to move itself.